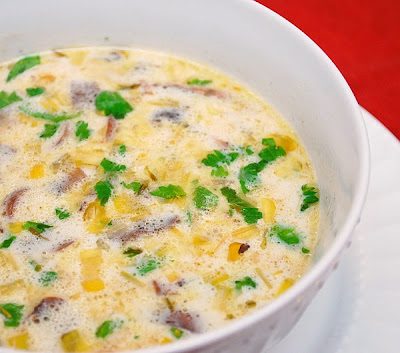 With the snow that seemed to never end yesterday and the winter wonderland that greeted me this morning, I knew we would be having soup for dinner. When it’s cold out, nothing warms me up like a good, satisfying soup! The problem is deciding on what soup to have. Thankfully, my fridge made the decision easy because I had quite a few mushrooms just waiting to be used. Before long, a cream of mushroom soup was in the making on the stovetop…

It seems like forever since I made an Ina Garten recipe (which is one of my favorite home chefs.) As luck would have it, I came across her recipe for cream of mushroom soup. I altered the recipe a bit to use what I had on hand and to save me some time. The original recipe called for using a mixture of portobello, shiitake and cremini mushrooms. I ended up doubling the amount of cremini and omitting the shiitakes since I didn’t have any on hand. Ina’s recipe also alls for making a homemade mushroom broth but I used chicken broth instead. For a vegetarian friendly alternative, you could use vegetable broth as well. But the key component of the recipe is the mushrooms. Even using the chicken stock, the flavor of the mushrooms is still very prominent in the soup. So if you’re a mushroom lover or have mushrooms in need of attention, this recipe is a keeper!

In a large pot, heat the butter and add the leeks. Cook over low heat for 15 to 20 minutes, until the leeks begin to brown. Add the sliced mushroom caps and cook for 10 minutes, or until they are browned and tender. Add the flour and cook for 1 minute. Add the white wine and stir for another minute, scraping the bottom of the pot. Add the mushroom stock, minced thyme leaves, 1 1/2 teaspoons salt, and 1 teaspoon pepper and bring to a boil. Reduce the heat and simmer for 15 minutes. Add the half-and-half, cream, and parsley, season with salt and pepper, to taste, and heat through but do not boil. Serve hot.