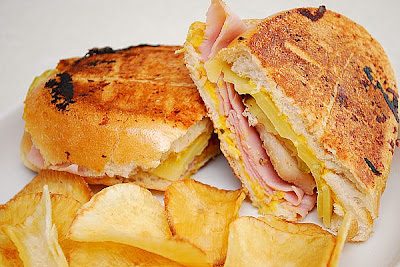 When we lived on the north side of the city, our favorite go to place when I was feeling too lazy to cook was this wonderful Cuban market which had an attached cafe. They made one of the best Cubano sandwiches there and it always hit the spot. It’s been quite a while since I’ve been back in our old ‘hood and I had a hankering for that Cubano sandwich today. With that sandwich on my brain, I did the next best thing… make the sandwich at home!

The Cubano sandwich is pretty much a grilled ham and cheese variation that includes slices of roasted pork and pickle slices. You really can’t go wrong with the combination of ham, swiss, pork, pickle and mustard. Now imagine those delicious fillings in between crispy, hot bread that’s been pressed to a golden brown. And in my opinion, this sandwich goes best with some garlic yucca chips, which I picked up from a latin market. Mmmm… say hello to my delicious friend…

Slice Cuban loaf or Mexican bolillo roll in half horizontally. Spread the mustard on both the top and bottom cut sides of the loaf/roll evenly.

After the sandwich is crispy on both sides and the cheese has melted, remove the sandwich carefully and slice it diagonally.