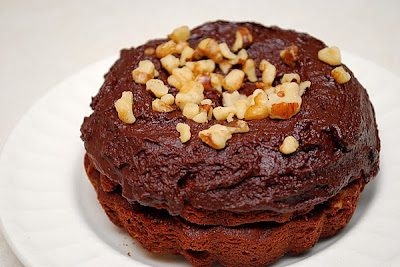 Another chocolate recipe challenge, compliments of Tuesdays With Dorie! This week’s Tuesdays With Dorie baking challenge is Dorie’s Milk Chocolate Mini Bundt Cakes, chosen by Kristen of I’m Right About Everything (who has the recipe within her blog).

I was so happy to try out this recipe since it gave me a reason to use my mini bundt pan. I haven’t used it often and was even contemplating on packing it away before I found out about this week’s challenge. Even though this recipe involved milk chocolate, I opted to use bittersweet instead since I prefer it more and it’s also what I had on hand.

There’s three parts to the recipe: swirl, cake batter and glaze. The swirl is just a mixture of chopped walnuts or pecans, cocoa powder and sugar. The cake batter consists of the usual ingredients – flour, baking powder, salt, butter, sugar, egg, vanilla, milk and melted chocolate. This batter filled the mini bundt mold part way before adding the swirl ingredients and topping off with the remaining batter. Once the mini bundt bake and cool, a glaze is made with melted chocolate and a bit of light corn syrup, that’s poured over the bundts as a final touch.

The result? Perhaps my mini bundt pan was on the larger size since the recipe wasn’t enough to fill my pan completely. Instead, I came out with mini bundts that look like they were cut in half horizontally. Once they cooled, I put two halves together to form a more substantial serving. The cake recipe was delicious – not too heavy, not too sweet and the nuts offered a nice texture. Now onto the glaze…

The glaze didn’t work for me and from what I read, it didn’t work for anyone either. Combining the melted chocolate and corn syrup just made it into a gritty mess but I continued on. I did my best to frost the top of the mini bundts since it didn’t flow and pour smoothly as a glaze should. As for the taste? My husband was the lucky recipient of the frosted mini bundt since he had a long, rough day and needed the pick me up. He said the overall dessert was dense and thought the cake tastes chalky. He didn’t mind the frosting so much but he didn’t like it as much.

Thanks to Steph for selecting this week’s TWD baking challenge. Hopefully others who tried this recipe had better luck that me or liked it more than my husband. Please check out Steph’s blog for the detailed recipe and be sure to take a peek at fellow TWD’s to see how their recipe came out!