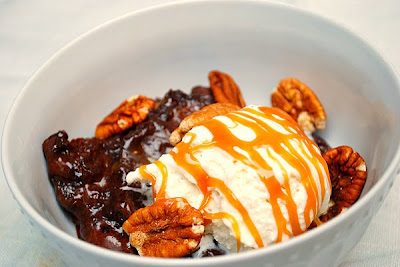 I had a craving for something chocolatey, gooey and sinful… don’t we all at some point? When I saw Ina Garten make the following recipe on her show, Barefoot Contessa, I knew I had to make it. With only a few basic ingredients from a well stocked pantry, I would be an hour away from chocolate decadence. To make it even more enticing, I drizzled some caramel sauce and sprinkled some toasted pecans over this bowl of deliciousness.

Now this dish is not your ‘pick up and devour’ type of brownie. It’s definitely more of a pudding where you’ll want to dish this up with a spoon. When it bakes up, the top will have a nice crust to it, similar to a standard brownie recipe, however when serving it up, you’ll notice that the texture is like a thick chocolate soup consistency. Don’t let it mess with your mind and think it’s not done… because that’s the way it should be! If you’re skeeved out by the runny texture, you can always bake it a little longer to firm up a bit (which I did myself).

Preheat the oven to 325 degrees F. Lightly butter a 2-quart (9 by 12 by 2-inch) oval baking dish. Melt the 1/2 pound of butter and set aside to cool.
In the bowl of an electric mixer fitted with the paddle attachment, beat the eggs and sugar on medium-high speed for 5 to 10 minutes, until very thick and light yellow. Meanwhile, sift the cocoa powder and flour together and set aside.

When the egg and sugar mixture is ready, reduce the speed to low and add the vanilla seeds, and the cocoa powder and flour mixture. Mix only until combined. With mixer still on low, slowly pour in the cooled butter and mix again just until combined.

Pour the brownie mixture into the prepared dish and place it in a larger baking pan. Add enough of the hottest tap water to the pan to come halfway up the side of the dish and bake for exactly 1 hour. A cake tester inserted 2 inches from the side will come out 3/4 clean. The center will appear very under-baked; this dessert is between a brownie and a pudding.

Allow to cool and serve with vanilla ice cream, drizzle with caramel sauce and sprinkle with toasted pecans. 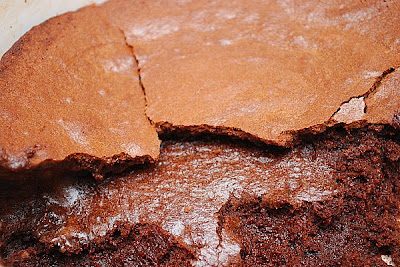