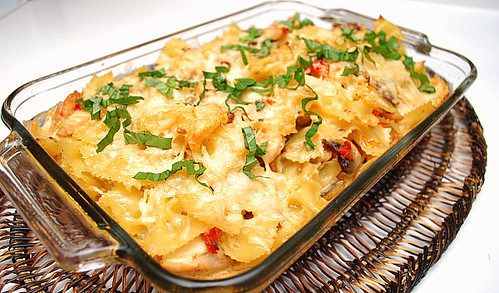 If there’s a dish that recently surprised me, it’s this one! For my recent Pasta Party dinner, I wanted to include a pasta dish that had a cream sauce other than alfredo. When looking through some restaurant menus for inspiration, I remembered trying Macaroni Grill’s Pasta Milano dish awhile ago. In an effort to recreate that dish for my dinner, I tweaked the recipe to my tastes and hoped for the best. To my surprise, my guests loved my Pasta Milano and even my husband was asking me to make it again the next day!…

Macaroni Grill’s Pasta Milano dish consists of “roasted chicken, sun-dried tomatoes, fresh mushrooms and imported farfalle pasta in a roasted garlic cream sauce.” It sounds pretty approachable if you wanted to make it at home, right? Well, fortunately I found a recipe online to use as a guide. Rather than using fresh minced garlic, I wanted a subtle sweetness and used roasted garlic instead. I also decreased the amount of chicken from the original recipe since I wanted to cut it up and toss it with the pasta rather than serve a whole breast per person. Another change to the original recipe I used was making the sauce in one pan versus two. Who wants to clean more cookware than needed anyway? Besides, using the same skillet allowed me to use every bit of flavor. Lastly, I baked the pasta dish in the oven with a generous topping of Parmesan cheese for some texture on the top and to help the pasta soak up all the flavors of the roasted garlic cream sauce. I’m definitely making this again and again because it was the hit of the Pasta Party dinner!

Add the roasted garlic, sundried tomatoes and chicken broth to the hot skillet. Allow it come to a boil. Reduce heat and simmer, uncovered, for about 10 minutes or until the tomatoes are tender. Add the cream and bring to a boil; stirring.Take off heat and add the bacon, chicken and mushroom to the sauce and set aside.

Meanwhile, preheat your oven to 350 degrees and bring a large pot of lightly salted water to a boil. Add dry pasta and cook for 8 to 10 minutes or until al dente; drain, transfer to a bowl.

Pour the chicken and sauce over the hot pasta and toss. Place in a baking dish and top with shredded Parmesan cheese and bake in preheated oven for 5-7 minutes until cheese melts.

* To make ahead/freezer meals – Prepare as directed, however cook pasta to barely al dente. There should be a bite to the pasta where it’s not completely cooked. Place pasta, chicken and sauce in an ovenproof container and allow to cool. Cover and freezer. When ready to prepare, defrost and bake in preheated oven as directed above.