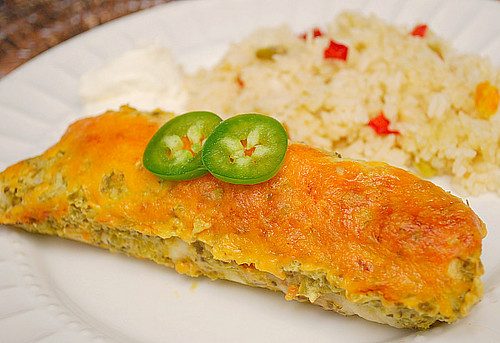 It’s been confirmed – homemade meals are and will always be better than fast food meals. It’s always been my belief and tonight’s dinner justified it once again! Yesterday was a busy day with quite a few errands to run (hence, no blog post) and I shamelessly admit to having lunch at Taco Bell. It’s not a usual place I eat at but since it’s been ages since I had Taco Bell, it was a good idea at the time. Just as I figured, the food was “eh” and today I felt the need to redeem the lunch I had. As a result, I made these Sour Cream Chicken Enchiladas… which completely reminded me why it’s been ages since I had Taco Bell!
After my lunch at Taco Bell yesterday, I couldn’t help but think of how I could improve what I ordered. That sent my mind spinning with ideas for Mexican American fare and then the cravings settled in. Fortunately, I had the ingredients on hand to make these flavorful enchiladas and the recipe couldn’t be easier! Another bonus is that this recipe is great to make in advance and even freeze to enjoy later (which will definitely come in handy in the next few weeks!) 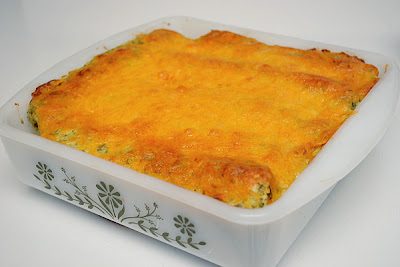 Years ago I remember making chicken enchiladas with a creamy sauce. I’m not sure if this was the same recipe I made during my pre-blog days, but regardless, this was a stellar recipe. I adapted the recipe by using pickled jalapeno slices instead of the original jalapeno salsa the original recipe called for. The reason for using the pickled jalapeno slices was because it included a bit of onion and carrot, which added additional flavor and some slight sweetness. Be sure to use that, otherwise you can add 1-2 baby carrots and 1/2 a small onion to the sour cream mixture. I halved the recipe below to feed 5-6, but the recipe as written serves 12.

To Make Sour Cream Mixture: In a blender or food processor, puree cilantro, sour cream, jalapeno salsa and 1/2 can of the green chile salsa. Set aside.

Heat tortillas in conventional or microwave oven until soft. Pour enough of the sour cream mixture into a 9×13 inch baking dish to coat the bottom.

Place 2 heaping tablespoonfuls of the chicken mixture in each tortilla, roll up and place seam side down in the baking dish. Pour remaining sour cream mixture over all and top with shredded cheese.

Cover dish tightly with aluminum foil and bake at 350 degrees F (175 degrees C) for about 30 minutes, or until dish is heated through and bubbling.