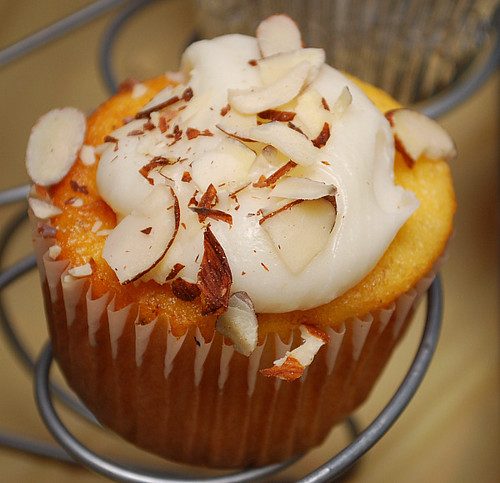 What would a tropical themed dessert table would it be without something made from bananas? It was an obvious ingredient to use and what better way to incorporate them than with a simple cupcake recipe! The last dessert to feature this week from my friend’s recent bridal shower is the Banana Cupcakes with Cream Cheese Frosting I made. These were ridiculously easy and no one could tell that these cupcakes actually came from a box!

Just as I did with the Mango Cupcakes I made, these were also made using a box mix with a few substitutions. It’s a great way to whip up some creative cupcakes without going through too much effort. The result is a beautiful and buttery cupcake crumb with super sweet bananas swirled in.Topping them off is a simple cream cheese frosting and a garnish of toasted almond slivers.

Follow the box instructions, putting all the ingredients in a large bowl and using the buttermilk in place of the water specified (the box will call for more water than the amount of buttermilk that you are using), using the amount of canola oil that is called for (usually 1/3 cup), and adding the eggs. Beat with an electric mixer (or in your stand mixer if you prefer) until moistened, about 30 seconds. Increase the speed to high and beat until think, 2 minutes longer.

Fill each muffin cup two-thirds full. Bake in the preheated oven for about 12-15 minutes, or until a toothpick inserted in the center comes out clean. Remove the cupcakes from the baking pans, place on a wire rack and allow to cool completely. Frost with cream cheese frosting (recipe follows) and garnish with a piece toasted almond slivers.

In a large mixing bowl, beat the softened butter and cream cheese together until fluffy; and beat until fully incorporated.

Slowly add confectioners or powdered sugar into the bowl, 1/2 cup at a time and beating after each addition. Continue adding the sugar until you have a thick frosting of your preferred consistency. Garnish with a piece of toasted almond slivers for garnish (if using).