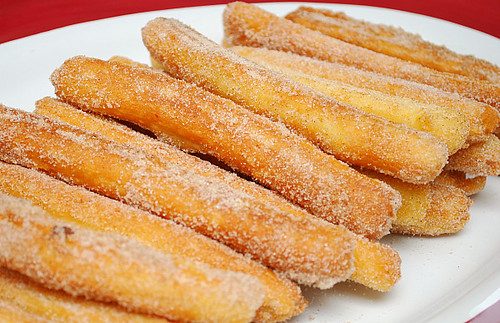 Happy Cinco de Mayo! I’ve been blogging now for over three years and have always tried making new recipes every week. There are a few recipes I’ve been going back to every so often and this recipe is one of them. I first blogged about these Churros when I made them for a Superbowl gathering back in February of 2007. Back then, didn’t have a picture of the end product then but since I made these Churros for my recent birthday fiesta, I thought I’d bring this recipe back to life!

I really liked the ease of this specific recipe. I tried a few different recipes beforehand and this one really nailed the flavor and texture I was looking for and it was also the easiest to make. Besides, who knew churros require basic ingredients everyone already has on hand? That means you’re never too far away from making these treats any day of the year, not just for Cinco de Mayo!

In a medium saucepan, heat water and margarine to a rolling boil. Combine the flour and salt; stir into the boiling mixture. Remove from heat and stir vigorously until the mixture forms a ball, about 1 minute.

Beat in the eggs one at a time into the mixture. Stick with it even if it looks and feels like it won’t come together! Spoon the mixture into a pastry bag fitted with a large star tip or in a quart or gallon sized storage bag with a corner snipped off. (I used a storage bag when I made these since it was faster to do and less clean up…) 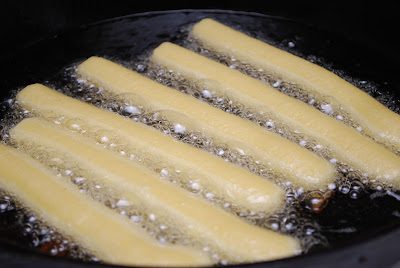 Carefully squeeze out 4 inch long strips of dough directly into the hot oil. Fry 5 or 6 strips at once, until golden brown, about 2 minutes on each side. Remove from hot oil to drain on paper towels. Stir together the sugar and cinnamon; roll churros in the mixture while still hot.

* You can omit the cinnamon sugar coating and choose to keep them plain. The churro dough has no sugar so you might want to sweeten it up either way. If you prefer it plain, I suggest making dipping sauces like strawberry, caramel, chocolate or even honey to add the sweetness.