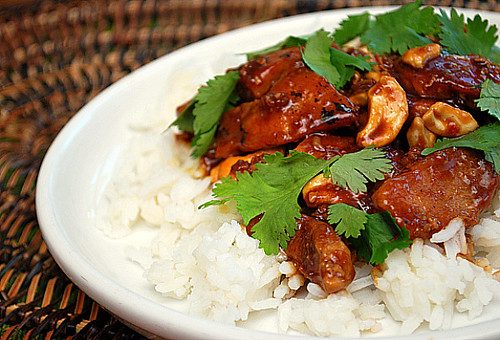 If there’s one thing we rarely do is have Chinese take out. I don’t see the need to since making Asian dishes come so naturally for me. This recipe for Stir Fried Cashew Pork is one that you can prepare in less than 30 minutes – definitely faster that any Chinese restaurant delivery service! And I’m willing to bet it tastes better too without any MSG…
Stir Fried Cashew Pork is definitely a Chinese American dish that’s popular in our house. After browning and sauteeing the pork, garlic and ginger is added to the skillet for the base of aromatics. For the sauce, a mixture of hoisin sauce, water, soy sauce and red pepper flakes are added along with the cashews. The sauce eventually thickens while it deglazes the bottom of the skillet. Before you know it, the dish is done and garnished with fresh cilantro leaves for that added pop of color and bright flavor. Served over steamed rice or even your choice of noodles, this is one dish that may make you rethink having Chinese food delivered!

Combine the hoisin sauce, water, soy sauce, and pepper flakes in 1 liquid measuring cup. Heat a few teaspoons of the oil in a large nonstick skillet (or cast iron skillet) over medium high heat until it just starts to smoke. Brown and saute the pork in the skillet and push out to the sides of the pan when done.