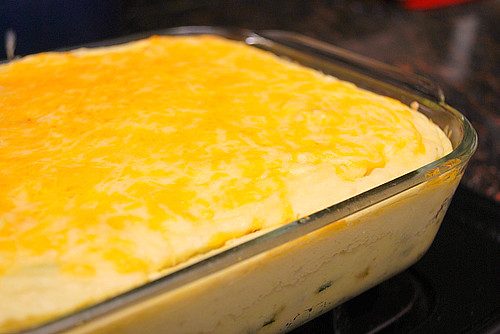 Potatoes are such a staple in American pantries but in our house, we prefer rice… although I continue to try switching things up with potatoes every now and then. To accompany the hearty beef stew I made for dinner, I came across this recipe for Mashed Potato Casserole and it’s a little twist on the usual mashed potato side dish. If you like light and fluffy potatoes, this recipe is for you!…

Potatoes are great as a blank flavor canvas. You could put together various flavor combinations with potatoes as a base and it would work. For example, think about all the ways you can top a baked potato! The same applies with this recipe in that you can adapt this to incorporate whatever flavors you’d like. It makes for a great main dish too if you jazz it up with additional ingredients and flavors. Some ideas: buffalo chicken mashed potato casserole, Tex-Mex taco mashed potato casserole, Italian sausage & peppers mashed potato casserole… you get the idea.

With so many other ideas to adapt this Mashed Potato Casserole recipe, you should definitely try it plain too. It was the perfect accompaniment for our hearty beef stew and the texture was so light and fluffy. The potatoes are boiled, mashed and whipped in a bowl. To add flavor, a mixture of melted butter, half & half,  Dijon mustard, minced garlic and chicken broth was added to the potatoes. For that fluffly texture, eggs are whipped in one at a time as well. For a bit of color and freshness, chopped fresh chives are folded in and the entire mixture is baked in a dish until it rises and browns. Since I love potatoes and cheese, I also topped the casserole half way through cooking with some shredded cheddar and colby cheeses. 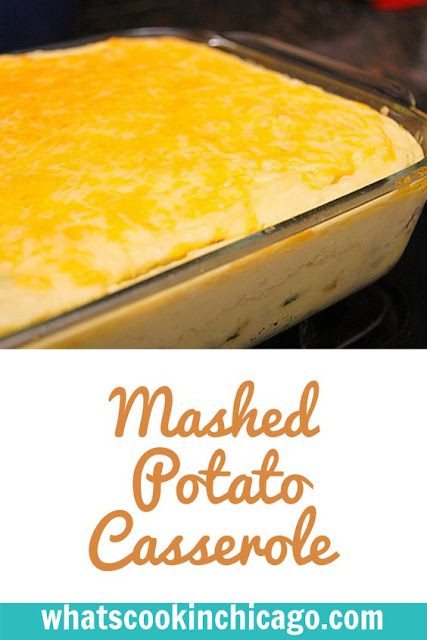 Preheat the oven to 375 and place oven rack in the upper middle position.

Cut up the potatoes (skin on) into cubes and place in a pot. Cover with water and let it come to a boil, cooking until the potatoes are tender, about 8-10 minutes.

Combine the half & half, butter, garlic, mustard and salt in a saucepan over medium low heat until smooth and warmed.

Drain the potatoes and transfer them into a large bowl. With an hand mixer on medium low speed, whip the potatoes, slowly adding the half & half mixture until smooth and creamy. Scrape down the bowl and beat in the eggs 1 at a time until incorporated. Fold in the chopped chives.

Place the potato mixture into a greased 2 quart baking dish and smooth over the top or use a fork to make a peaked design. Bake until the potatoes rise and brown, about 30-35 minutes. Let cool about 5-7 minutes before serving.

* If you would like to add cheese to the top of the casserole, bake the casserole for 15-20 minutes, remove from oven and top with cheese. Place it back in the oven to bake for an additional 10-15 minutes.