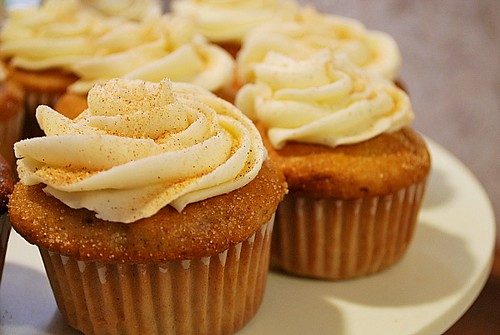 Snickerdoodle cookies are popular at holiday cookies swaps (which will be just around the corner!) namely because they’re easy to make and who doesn’t like a simple cinnamon sugar cookie? Using these cookies as inspiration, I thought Snickerdoodle Cupcakes would be a great addition to the fall cupcake tower I recently made. These cupcakes are moist with just the right amount of cinnamon in each bite. The vanilla bean buttercream was also good, especially with the sprinkling of cinnamon sugar to top them off…

I came across this recipe from Allrecipes and taking the advice from previously reviews, made the suggested adaptations of using unsalted butter in place of the shortening originally called for. Another adaptation I made was adding vanilla extract and some cinnamon to the batter. The result? A moist and tender crumb, filled with cinnamon that I thought was way better than the cookie!

For the frosting, I used a simple Vanilla Bean Buttercream out of convenience since I had 3 other cupcake flavors to frost using the same flavor as well. However for the frosting I made, I decided against working with a vanilla bean as called for in the original recipe. Instead, I used one of my favorite vanilla bean shortcuts, which is to use vanilla paste. It’s a vanilla product combining the seeds of the bean with a thick, intense vanilla extract. I like the convenience of this product and I get the same flavor with specks of vanilla too. You can find vanilla paste online and at other gourmet retail shops. My preferred brand is made by Neilsen Massey. A sprinkling of cinnamon sugar once the cupcakes were frosted added the final touch these cupcakes were missing.

In a medium bowl, sift together flour, baking powder, cinnamon and salt. Set aside.

Combine the cinnamon and sugar in a small bowl and set aside.

Using a star tip with a pastry bag, pipe the frosting onto the cupcake.Sprinkle the cinnamon sugar over the frosted cupcakes to garnish.