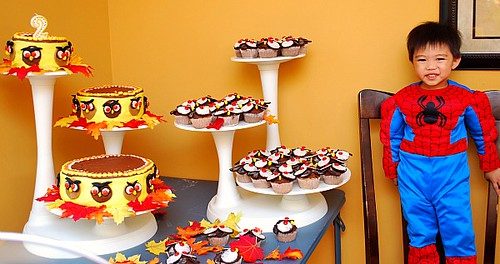 Lately, I’ve been so busy on weekends catering various parties and this past weekend was a fun one! With Halloween just around the corner, birthdays this time of year are especially fun to celebrate. Our little Ayden, the son of  close family friends, turned the big 2 years old. He had a Halloween Costume Birthday Party to tie in Halloween, giving all his friends a chance to wear their costumes early. When I consulted Ayden’s mom, she loved the idea of having an owl cake to highlight the fall season and still have a whimsical look for a toddler birthday. As a result, I made this Three Tiered Owl Birthday Cake with an Owl Oreo Cupcake Tower… 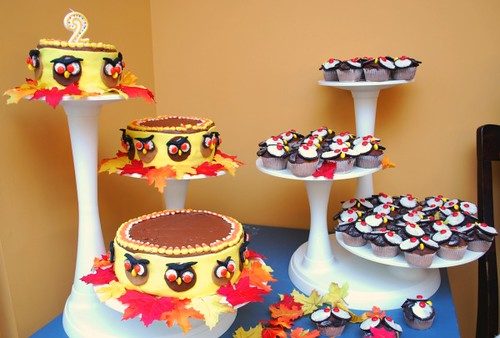 Ayden has a large extended family and with family friends also coming to the party, there needed to be enough cake to go around. The three tiered cake and a cupcake tower was perfect to serve all their guests. In fact, both kids and adults enjoyed the displays. Kids loved grabbing a cupcake on the go while they ran around playing with each other and the adults liked the traditional serving of cake. 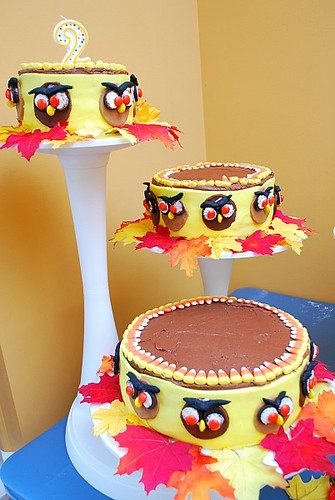 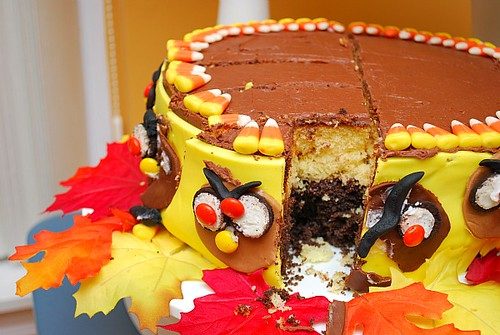 The tiered cake consisted of both a classic yellow butter cake layer and a rich chocolate cake layer, fused together with a creamy chocolate buttercream frosting. I covered the sides of each cake in fondant and made small owls with fondant, Reese’s Pieces candies and mini Oreo cookies for the decor to mimic the cupcakes. I used candy corn as a top border for the cakes to highlight the colors of fall, the Halloween season and it went perfectly with the color scheme. Lastly, the bottom border was fall colored leaves, taken from craft flower/leaves stems. 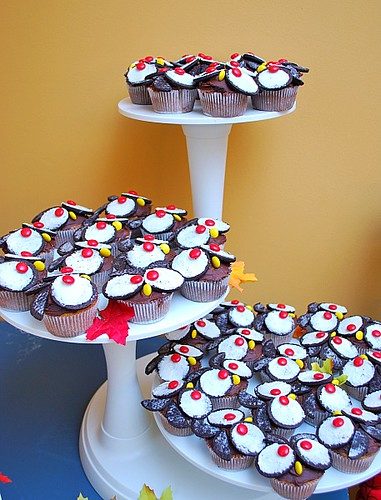 The cupcakes were the most time consuming to make but also the most fun. Rather than making a typical cupcake, I made Oreo Cupcakes where the bottom is an actual Oreo cookie half. I used the following recipe for a white cake with crushed Oreo cookies swirled in. The cupcakes were frosted with chocolate buttercream frosting and decorated with regular sized Oreo cookies and Reese’s Pieces candies. The only thing I didn’t do was use more frosting to coat the owl ‘eyebrows.’ With so much sugar loaded into these cupcakes, I figured I’d hold back on adding more frosting… and the kids didn’t seem to care whether the eyebrows were frosted or not! Making the cakes and cupcakes was so much fun, despite how time consuming it was. But the best part of it all was Ayden’s excitement as he watched in awe as I was setting up before the party and having all his friends watch in anticipation as they did the cake cutting. 🙂 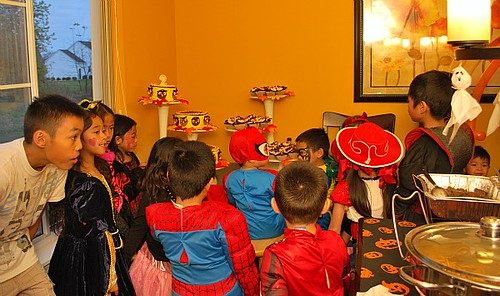 Preheat over to 350F. Insert liners into a medium cupcake pan.

Twist apart 24 Oreos. Place the wafer with filling on it, filling side up, in the bottom of each paper liner. Cut other wafers in half. Save 24 halves to place in the frosting. Crush the other wafer halves, also for garnishing.

Cut the remaining Oreo cookies into quarters with a sharp knife. Toss with 2 Tbsp flour and set aside.

In a large bowl cream the butter until fluffy, about 3-5 minutes. Add the milk and vanilla and mix to combine.

In a separate bowl mix together the flour, baking powder, and salt.

Add the dry ingredients to butter mixture. Mix until integrated. Stir in sugar. With an electric mixer on low speed, beat for 30 seconds. Turn the mixer up to medium speed and beat for 2 minutes. Add the egg whites. Beat for 2 more minutes. Stir in the quartered cookies.

Fill the cupcake lines three-quarters full. Bake for about 20 minutes or until a toothpick inserted in the center of cupcakes comes out clean. Cool cupcakes in the pan.

To decorate as Owl Cupcakes: Check out this great video tutorial!