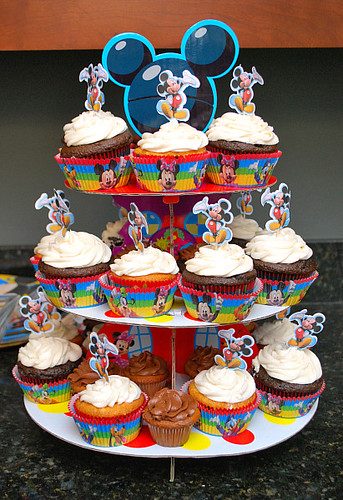 Now that I’m a mom, I’ve grown to love childrens’ birthdays more and more. Over the weekend, my friend Andrea threw a wonderful birthday 2nd party for her handsome son, Evan, and asked me to make some cupcakes for the celebration. The party had a cute Mickey Mouse theme so I kept it simple by making buttery Yellow Sour Cream Cupcakes and Chocolate Sour Cream Cupcakes… with a secret ingredient to keeping them moist…

When it comes to kids, I’ve learned that they love the simple flavors when it comes to cupcakes. After consulting with my 9 year old nephew (a self-proclaimed kiddie cupcake connoisseur), he told me to make both yellow and chocolate cupcakes. And that I did.  However,I couldn’t just whip up any regular old yellow and chocolate cupcakes though. Instead, I added some sour cream to each batter which really made the cupcakes moist without adding any additional flavor. For the frosting, I made a classic vanilla bean buttercream. 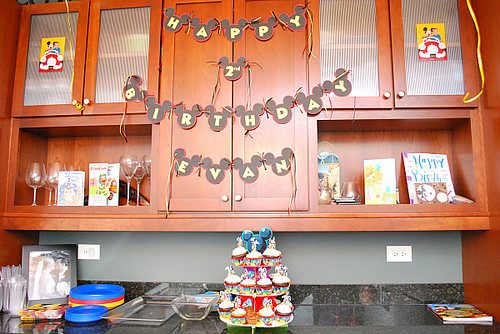 Preheat the oven to 350° degrees. Line cupcake pans or spray with non-stick spray. Set aside.

In a medium bowl, sift together the flour, baking powder, baking soda and salt.

In a large bowl, using an electric mixer, fitted with a paddle attachment or beaters, beat the eggs and sugar until they are thickened and lightened to a cream color. Beat for about 2 minutes on medium high speed. Be sure to scrape the sides of the bowl while your mixing. Blend in the oil and vanilla. Mix in the sour cream until no white streaks remain.

Mix in the flour mixture alternating with the milk until it is incorporated and the batter is smooth. Spoon batter into cupcake cups. Bake 20 – 23 minutes or until the cupcakes are lightly brown on top and a toothpick comes out clean. Cool the cupcakes on a wire rack for 30 minutes before frosting.

Preheat the oven to 350° degrees. Line cupcake pans or spray with non-stick spray. Set aside.

In a double broiler melt the unsweetened and semisweet chocolate. Stir until chocolate has melted and is smooth. Remove from heat and set aside.

In a separate bowl sift the flour, baking powder, baking soda, and salt.

Cream the butter and sugar with an electric mixer on medium speed for about 2-3 minutes until fluffy, stopping to scrape the sides of the bowl if necessary. Reduce speed to low, and carefully pour in the melted chocolate just until combined. Add the eggs one at a time being careful not to over beat but making sure the eggs have blended into the batter.

On medium speed, add the vanilla and instant espresso beat until creamy for about a minute. Mix in the sour cream until it has been incorporated well and no visible white streaks remain.

On low speed, add half of the flour, mix until just incorporated, and mix in the water. Finally add in remaining flour and mix until it is incorporated and the batter looks smooth.

Fill each liner with 1/3 cup of the batter. Bake for about 18-20 minutes until the tops feel firm and a toothpick comes out clean. Cool the cupcakes on a wire rack for 30 minutes before frosting.