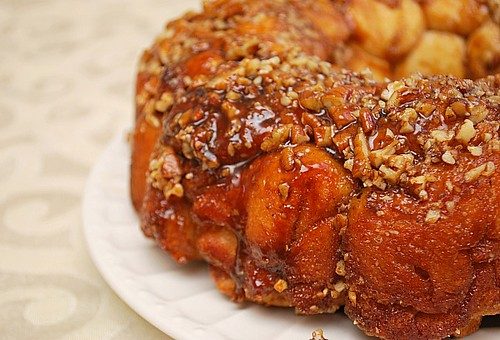 Eating breakfast is a challenge for me sometimes but it’s easier to do if I plan it the day before. One way to motivate me is to find some good breakfast recipes to make ahead. This recipe for Apple Cinnamon Monkey Bread fits the bill and is great throughout the day and not just for breakfast. Here, sweet little balls of cinnamon sugar dough are filled with chopped apples and baked with a buttery brown sugar sauce with chopped pecans. It certainly starts your day with a sweet taste of fall…
I’ve been meaning to make Monkey Bread for quite some time but never gotten around to it. Well, I finally had a chance but rather than making a typical recipe, I wanted to jazz it up somehow. Taking inspiration from Paula Deen, I adapted her recipe for ‘Gorilla Bread’ to make my Apple Cinnamon Monkey Bread.
In Paula’s recipe, she uses cream cheese stuffed in biscuit dough and added walnuts for texture. Instead of cream cheese, I chopped up some fresh apples and filled the biscuit dough with it. You could use walnuts in this recipe but I had pecans on hand so used those instead. The buttery brown sugar sauce tied everything so well along with the cinnamon sugar sprinkled throughout.

The best part of this recipe is that you can prepare it in advance, cover and chill. When you’re ready to bake, just let it come to room temp and bake. I plan on making this again during the holidays since it’s so easy and delicious too! 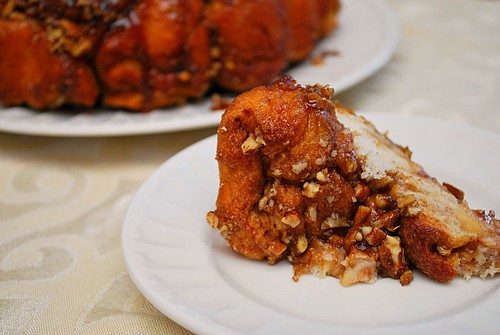 Preheat the oven to 350 degrees F.

Spray a bundt pan with nonstick cooking spray. Mix the granulated sugar and cinnamon, set aside.

In a small bowl combine the melted butter and brown sugar, stirring well; set aside.

Press the biscuits out and flatten with your fingers; dredge each side of the flattened biscuit in the cinnamon sugar. Place a teaspoon of chopped apples in the center of each biscuit, wrapping and sealing the dough around the apples; set aside. Repeat with all the remaining biscuits.

Sprinkle 1/2 cup of the nuts into the bottom of the bundt pan. Place half of the prepared biscuits in the pan. Sprinkle with cinnamon sugar, pour half of the melted butter mixture over the biscuits, and sprinkle on 1/2 cup of nuts.

Bake for 30 minutes. Remove from the oven and cool for 5 minutes. Place a plate on top and invert. 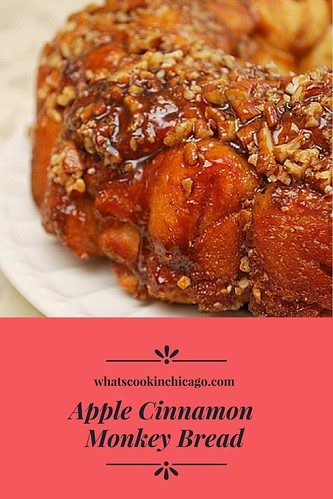