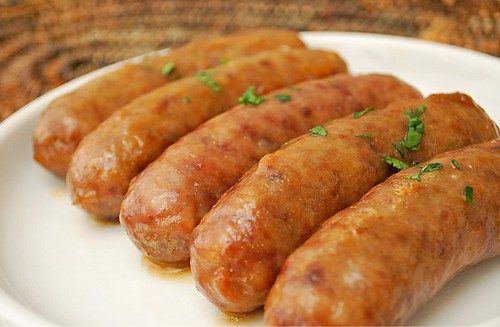 I’m usually a coffee drinker but this time of year is when I switch to apple cider. In fact, I usually have a gallon or two in my fridge to drink up but I also try to use apple cider in recipes as well. When cooking or baking with apple cider, I tend to reduce it to a syrup like consistency for a more intense flavor. This time, I used the cider as a braising liquid for bratwurst, which reduced down to a glaze. These Cider Glazed Bratwursts had the perfect touch of sweetness from the apple cider, making it a nice change from the traditional beer braised bratwurst recipe.

I prepared this with minimal ingredients – 3 to be exact. And preparing these were just as easy. Boil the brats in the apple cider until the cider reduces and thickens down to a glaze, then serve it up in a bun! You could adapt the recipe for the grill if you wanted as well. Either way, it’s a great way to serve up brats if you don’t want to use beer or if you just want a little sweet apple flavor with your brat.

In a large skillet, combine the apple cider, onions, and bratwurst. Bring the skillet to a boil and reduce to a rolling simmer. Continue simmering until the brats are evenly colored and have lost their raw look, about 15-20 minutes, turning them occasionally. The cider will eventually reduce and thicken to glaze the bratwurst.

Place the brats in the buns and garnish as desired. Serve hot.