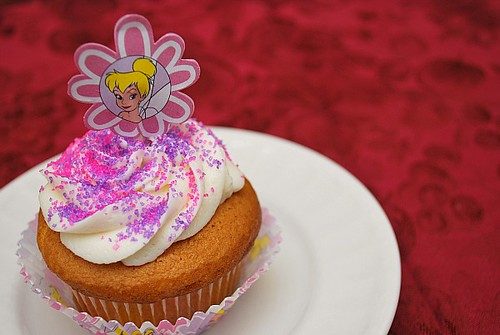 Cupcakes… again?! I’ve been making cupcakes every weekend for orders over the past month and it doesn’t look like I’ll be putting away my muffin pans anytime soon. How did I get looped into making cupcakes so often?! Well, the good thing is I can start focusing on holiday flavors for upcoming orders. This weekend was for a special birthday girl turning 9 years old. My client was looking for a simple cake flavor decorated with a girly touch. As a result, I made these French Vanilla Fairy Cupcakes. A moist vanilla cake is topped with a rich vanilla buttercream frosting, sprinkled with pink and purple sugars and garnished with a Tinkerbelle pick. With a wave of a sparkly wand, these disappeared in no time!…

Making these cupcakes were a lot of fun and got me in tune with my girly girl side. I used the same French Vanilla Cake recipe I made awhile back over the summer and it was just as good in cupcake form. It’s a simply stated cake that’s can be used as a base for incorporating other flavors, however I like it just as it is. To frost these cupcakes, I made my go-to vanilla buttercream and decorated with colored sugars. 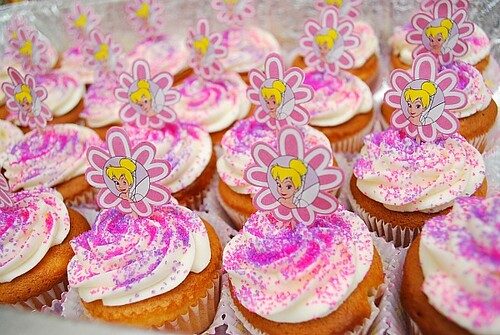 In the bowl of a stand mixer, beat the butter on high until soft for 30 seconds then add sugar. Beat on medium-high until light and fluffy. Continue to add eggs and egg yolks one at a time, beating for 30 seconds between each.

In a separate bowl, whisk together flour, baking powder, salt and baking soda.

Measure out milk, cream and vanilla extract in 2 cup measuring cup. Cut open the vanilla bean and scrape out the seeds and add them to the milk mixture.

Add the flour mixture to the stand mixer bowl, then the milk mixture; alternating between the two and ending with the flour. Mix thoroughly.

Using a star tip with a pastry bag, pipe the frosting onto the cupcake and garnish with sugars.