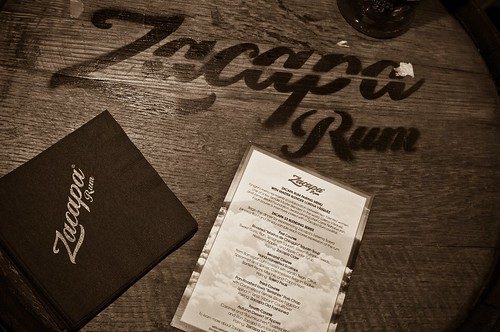 Rum. What’s the first thing that comes to mind? Pirates and Captain Morgan? Pina Coladas? Rum & Coke? Well, whatever it is, I’m sure I thought it too. When I was recently invited to a special rum tasting with Ron Zacapa Rum and paired dinner event, I realized I didn’t know all that much about rum. I was eager to learn more about it and that I did, and then some. This rum event was hosted by Ron Zacapa Rum and the popular Chicago restaurant, Naha. Read on to learn more about rum and the amazing eats Naha had in store for me… 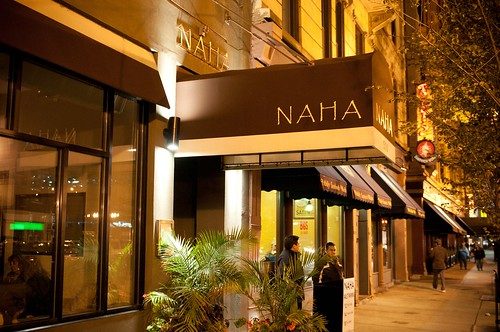 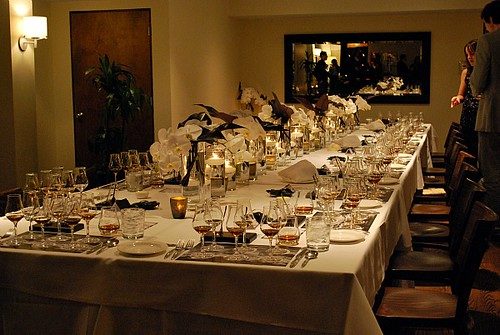 Naha is a wonderful restaurant here located in Chicago’s Rivernorth neighborhood which fuses Mediterranean and Californian cuisine. For this special dinner, our dining area was beautifully decorated. Soft lights from floating candles, fresh white orchids and a table of sparkling glasses awaited us. The evening’s menu represented a collaboration between two talented women, one of a few female Master Blenders in the world, Lorena Vasquez of Zacapa Rum and James Beard Foundation award-winning Chef Carrie Nahabedian. Each course we enjoyed was inventively paired with a Zacapa Rum cocktail. 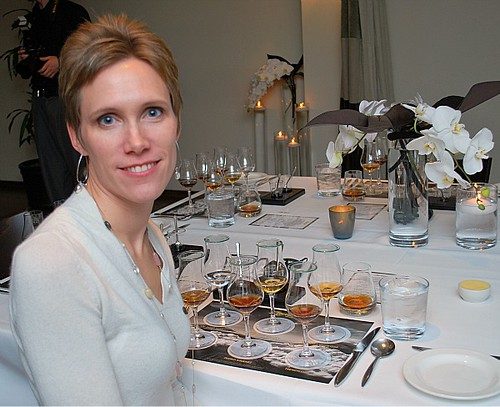 Joining me for the dinner was my friend and culinary classmate, Jill. I met Jill a few years ago when she came over to our home for a wine event with her husband through my culinary group, What’s Cookin, Chicago. Years had past since I saw her again and when I did, it was the first day of culinary school a few months ago since she was in my class! What a small world and better yet, she’s a genuine foodie like me and we can talk hours on end about food, restuarants, recipes and everything in between. I knew Jill could definitely appreciate this event so I was thrilled to have her join me. 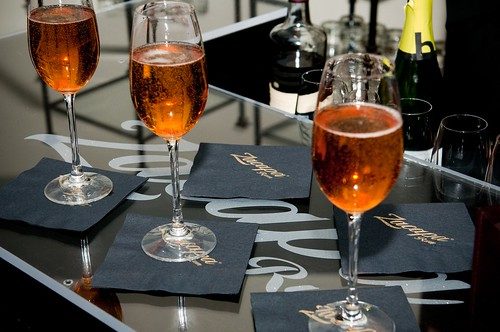 Our first cocktail of the evening was a Zacava. This was a nice start as it was light and refreshing. Zacapa Rum 23, a sugar cube and bitters are combined in a champagne flute and topped with Cava. We enjoyed these as we waited for all the guests to arrive. 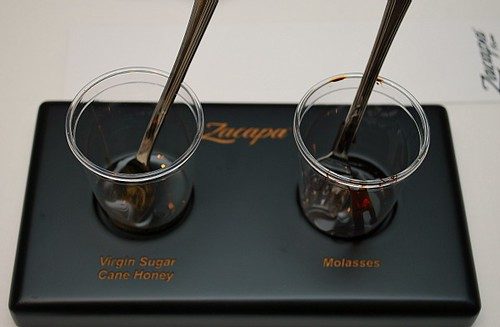 We started out the evening learning about Zacapa Rum’s history. Ron Zacapa Centenario is a popular premium rum that comes from Guatemala and was created in 1976 to celebrate the centenary of the foundation of the eastern Guatemalan town named Zacapa. Many are familiar with Caribbean rum, which is made with molasses. However, Zacapa Rum is different in that it’s made using the concentrated first pressing sugar cane juice, which is called virgin sugar cane honey and is aged and blended using a unique aging system. This system is called Zacapa’s Sistema Solera process which is based on the solera method traditionally used for sherries. 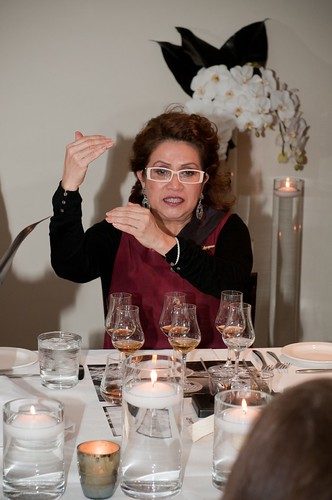 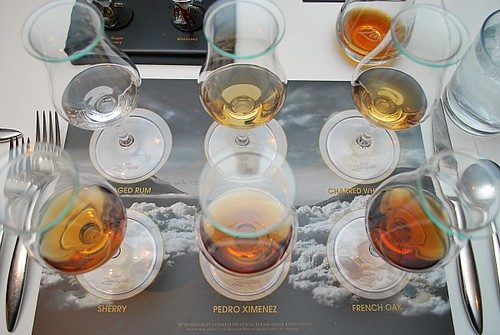 The Zacapa Sistema Solera process is overseen by master blender, Lorena Vazquez. In this process, the rum goes through six different barrels of production to extract various notes of flavor. Zacapa Rum claims that part of their success lies in the fact that the barrels are stored 2,300 meters above sea level in an aging facility situated below the upper slopes of the mountains and volcanoes of Guatemala, where the temperature is an average of 62 degrees Fahrenheit. 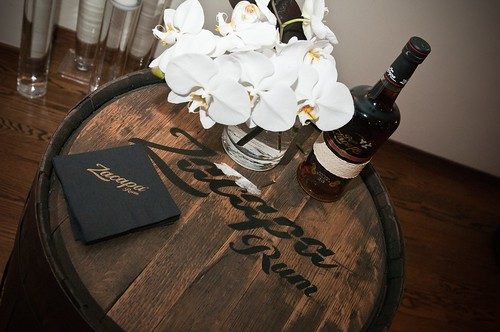 Early Zacapa bottles came in a bottle covered in a petate, a handwoven matting made from palm leaves which dates from the Mayan period. More recently they feature a band around the middle of the bottle as seen above. The rum has won awards from different international competitions and is the first rum to be included in the International Rum Festival’s Hall of Fame. 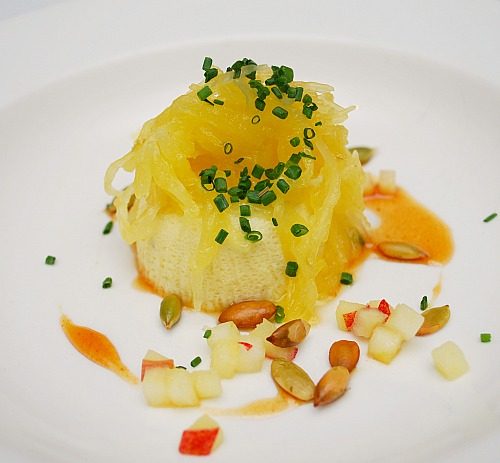 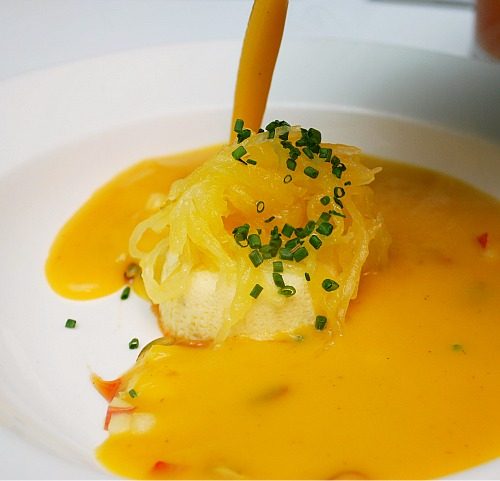 After learning about the history and process of Zacapa Rum, it was time for our multi-course dinner prepared by Chef Carrie Nahabedian, accompanied with special cocktails made with Zacapa Rum. The first course was a Roasted “Marina de Chiogga” Squash Soup. This soup was beautifully presented as it was poured tableside. A sweet garlic flan, spaghetti squash, green pumpkin seeds, heirloom apples and an apple cider syrup made this a wonderful start to the meal. 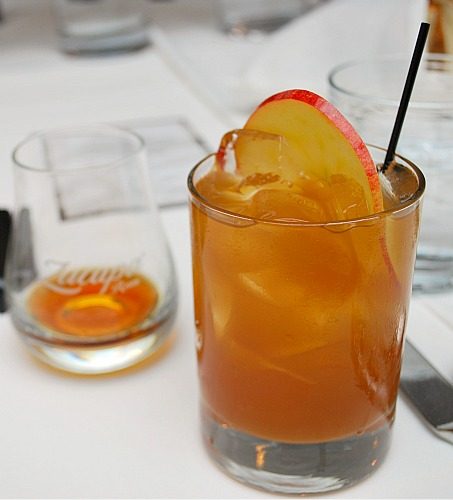 The paired cocktail to go with our soup course was a Zacapa Cider. It combines Zacapa Rum 23, apple cider, fresh lemon sour and allspice dram. Everything is shaken up and strained over ice in an old fashioned glass and garnished with an apple slice. 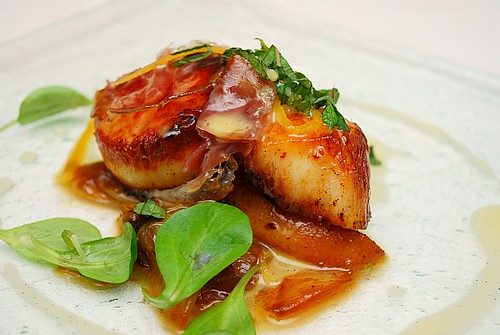 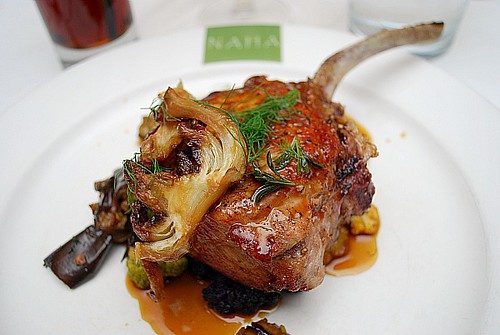 The main course was amazing… and huge! We enjoyed a Pan Roasted Iowa “Berkshire” Pork Chop. This succulent pork dressed sat atop caramelized fennel, globe eggplant, spinach and vibrant cauliflower. It was quite a course that I couldn’t even finish the chop, but it was oh so good… 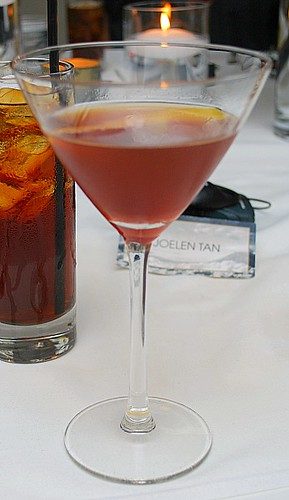 To wash down the pork chop, we had a Zacapa Old Fashioned as our next paired cocktail. This drink takes muddles an orange slice, spice infused cherries, bitters, simple syrup in a glass. Zacapa Rum 23 and Carpano Antica are added, stirred and double strained into a Martini glass. Cherry and orange bitters top the drink… yum! 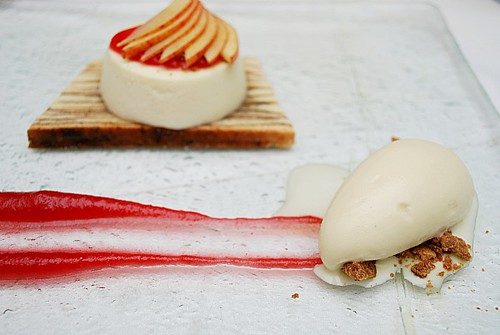 Our final course was a delicious sweet ending to the meal. We enjoyed an Autumn Dessert of Apples. This dessert presentation included a slice of caramel “Baumkuchen,” toasted walnuts and Ron Zacapa Rum ice cream. It was beautiful and the flavors just melded together so perfectly. 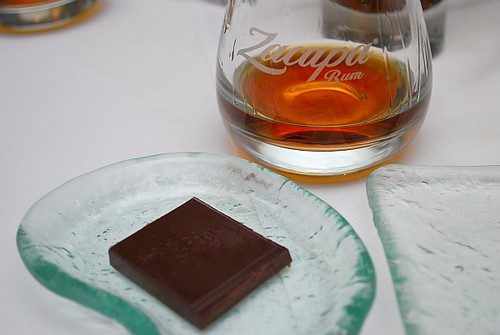 As a pairing to dessert, we also enjoyed a glass of Zacapa XO Neat with dark chocolate. This rum is a super premium rum that’s been aged between 6 to 25 years. It’s amazing how the chocolate really brought out more flavor from the Zacapa Rum!

It was a fantastic evening where I left with a greater appreciation of rum in general and a high level of respect for those involved in making Zacapa Rum. The stories told of the men and women who make this handcrafted rum really makes each bottle so special. If you happen to see Zacapa Rum while you’re shopping for spirits to stock your bar this holiday season, do give it a try because it’s not only amazing in cocktails and on it’s on, but it’s something that Guatemalans are so very proud to offer folks around the world. 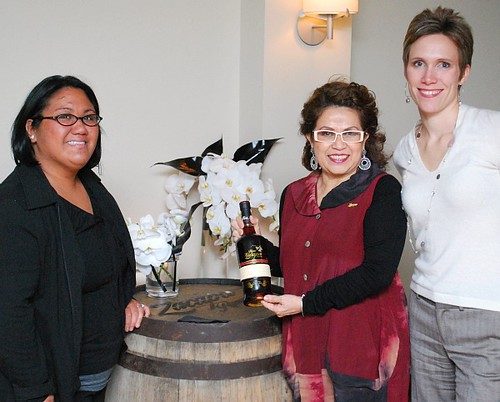 Many thanks goes out to Lorena Vazquez for coming out to join us from Guatemala and share her experience and stories of Zacapa Rum and Guatemala and also to Rachel Chadderon who coordinated this wonderful event.