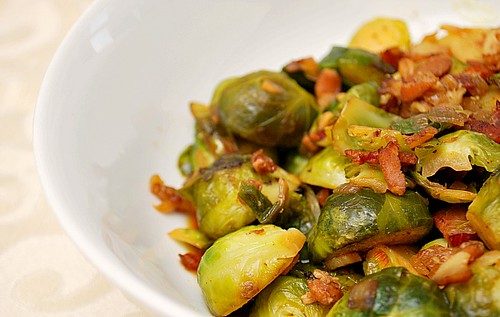 Bacon is the wonder ingredient. It has the power to transform both sweet and savory dishes into something even more amazing. Such is the case with brussels sprouts. These little micro cabbage looking vegetables are delicious when pan roasted with bits of bacon. As I started reviewing potential dishes for our Thanksgiving meal, I made these Pan Roasted Brussels Sprouts with Bacon for a test run and yes… they’re definitely going on our holiday table this year!

When I served these up, my husband asked me why I tend to make brussels sprouts only during the holidays. I’m not sure why but I know that I’ll be making them more often since I get excited when he suggests vegetables to incorporate in meals. This recipe is pretty straightforward where thick cut bacon is cooked until crispy in a pan, removed and chopped up. In the leftover bacon drippings, the brussels sprouts are sautéed until crispy and the chopped bacon is tossed in. I don’t add any salt to the dish since the saltiness of the bacon is plenty for our tastes but season how you’d like. I’m definitely not waiting until the holidays to make these again…

Cook bacon in a large skillet over medium-high heat until crispy. Remove to a paper towel-lined plate, then roughly chop.

In same pan with bacon fat, melt butter over high heat. Add onions and brussels sprouts and cook, stirring occasionally, until sprouts are golden brown, 8 to 10 minutes. Season with salt and pepper, to taste, and toss bacon back into pan. Serve immediately. 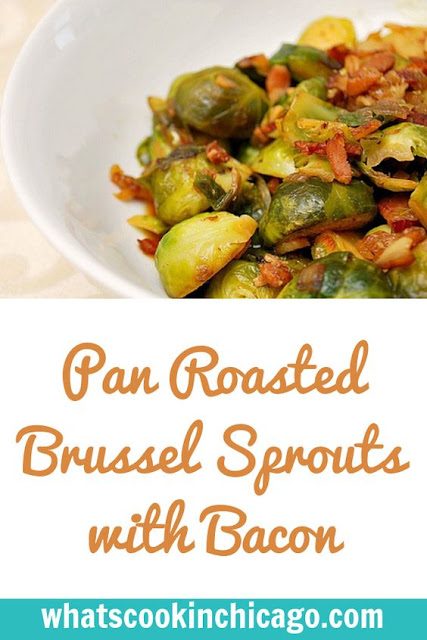