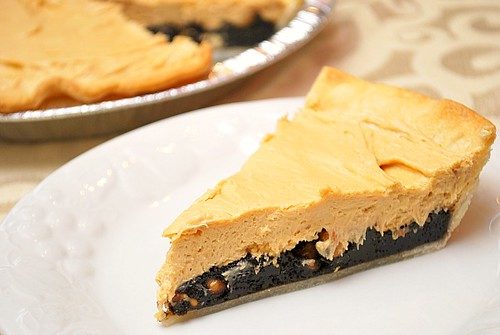 This is a post my husband wished I didn’t write. Actually, it’s a recipe he wished I didn’t even make. He’s not a peanut butter fan and so when he found out I was making this Peanut Butter Brownie Pie, he wasn’t too keen on the idea at all. Regardless, I continued with my plan and made this truly decadent pie. If you’re a fan of peanut butter and chocolate (specifically, brownies), then this is a pie for you!…

This pie is probably one of the most decadent ones I’ve made. Peanut butter is a rich ingredient to work with and when it’s paired with chocolate, it’s even more rich. A pie crust is filled with a prepared brownie mix and peanut butter chips then baked. When it’s out of the oven and cooled to room temperature, the brownie filled crust is chilled for at least an hour to set. Meanwhile, a creamy peanut butter filling is made with peanut butter, softened cream cheese, powdered sugar, and whipped topping. This mixture is added to the pie crust and chilled once again. When you’re ready to serve, warn your guests that this is not one for the calorie conscious!

Bake 30 to 40 minutes, covering edge of crust with strips of foil after 15 to 20 minutes, until crust is golden brown and center of brownie is set. Cool slightly, about 20 minutes. Refrigerate 1 hour or until completely cooled.