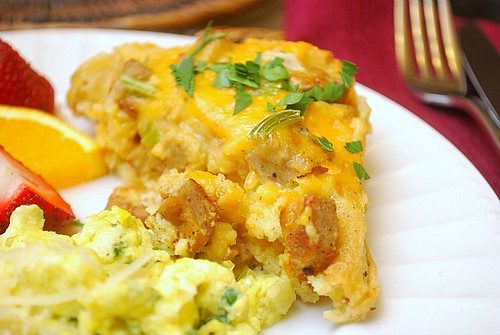 Breakfast Casseroles. They’re common to make around Thanksgiving and Christmas. Another time you’ll see them is for brunch buffets. What is it? Most recipes usually call for bread, an egg mixture and sometimes breakfast meats like sausage or bacon mixed in and topped with cheese. These casseroles are popular because it’s easily assembled making for a stressfree dish. I’m not particularly a fan of them… well until now. I came across this recipe for a Maple Sausage And Waffle Breakfast Casserole and it certainly turned me on to breakfast casseroles. It’s like a hybrid of waffles, french toast and casserole all into one with both sweet and savory flavors throughout. So if there’s any breakfast casserole you should try for your next brunch event or even for ‘brinner’ (breakfast dinner), it’s definitely this one!…
I normally don’t buy processed foods like frozen waffles, so I was surprised to see that it was called for in this recipe. The key thing is to get Eggo brand waffles because it offers the perfect texture needed to make this casserole a success. I’ve tried other brands and it’s true – Eggo waffles are essential.
This casserole starts out by toasting the waffles in an oven to get crisp. The waffles are then layered in a dish with cooked maple flavored breakfast sausage, shredded cheddar cheese and sautéed onions, bell peppers and celery. An egg mixture of eggs, maple syrup and milk is poured over the top, covered in plastic wrap and weighted down while chilling for at least an hour or overnight. By the time you’re ready to bake, all the egg mixture has absorbed into the waffles. It’s baked for about 45 minutes and once done, you have a beautifully puffed up dish full of sweet and savory flavors. I served this with spinach Parmesan fluffy eggs and fresh fruit. It was a great start to the morning and so easy to prepare!
* Aside from using Eggo brand waffles, I highly recommend using the Eggo French Toast flavored waffles for this. It adds a nice touch of cinnamon and more maple flavor! 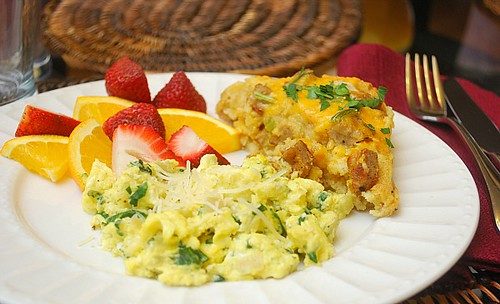 Preheat oven to 375-degees and toast waffles on a baking sheet on both sides for about 10 minutes.

Brown sausage in a skillet until no longer pink and drain on paper towels. Transfer to bowl and set aside.

In the same skillet, sauté onions, peppers and celery until softened. Transfer to bowl with sausage.

Whisk eggs and milk in a bowl with the syrup, salt, and pepper. Pour egg mixture over the waffles layers. Cover with plastic wrap and set a weight on top.

Refrigerate overnight or for at least 1 hour.

Preheat oven to 325-degrees, uncover casserole and bake 45 to 50 minutes until edges are puffy. Cool 5 minutes and serve. 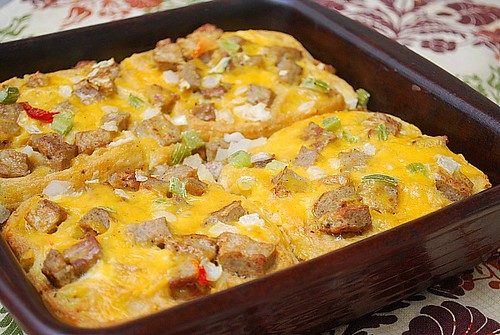