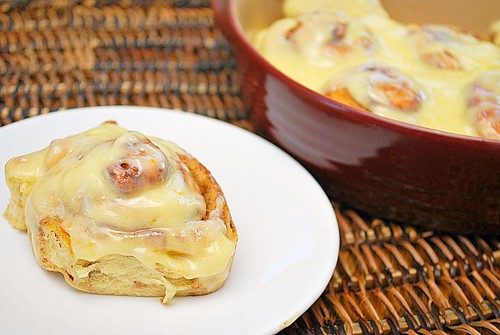 I love lazy mornings and to make them better is to bake up something sweet to enjoy with my morning coffee. With the Blizzard of 2011 coming through Chicago, we were snowed in and that was the best excuse to get baking in the kitchen! One of my favorite morning treats are homemade cinnamon rolls and I enjoy trying various flavors aside from the plain old cinnamon. This time around, I made these Orange Cinnamon Rolls with some fresh oranges. Using the zest and juice in the dough and frosting, you can’t help but love the burst of citrusy goodness these have in every bite!…
I’ll admit – I cheated a bit with my cinnamon roll dough. Normally I’d make it from scratch but because I was snowed in with 3+ feet of snow drifts blocking both our front door and garage, I used store bought frozen bread dough I dug out of our freezer. It’s great to use to save some time but if you prefer to make the dough from scratch, by all means do! Just follow the recipe below using your homemade dough instead of the frozen one noted.
These rolls married cinnamon and orange so well. I thought the balance was good with the citrus notes more forward. I added more orange zest than written below to the dough and frosting because I wanted the orange flavors to come through more. Another tip is to add dried cranberries for another variation! I would imagine this recipe would work just as well with tangerines, tangelos (mineolas) or even blood oranges too…

On a lightly floured surface, roll dough into a 14-in. square. Spread with butter. In a small bowl, combine the pecans, sugar, brown sugar, orange peel and cinnamon. Sprinkle over dough to within 1/2 in. of edges.

Roll up jelly-roll style; pinch seams to seal. Cut into 28 slices. Place cut side down in two greased 9-in. round baking pans. Cover and let rise in a warm place until doubled, about 40 minutes.