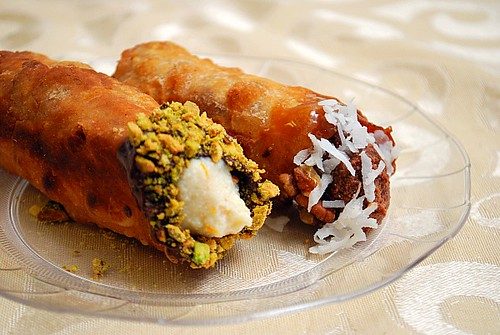 When you’re throwing an Italian inspired party, it can be quite a task to come up with a dessert only fitting for the menu. For the recent Chicago Deep Dish Pizza Showdown party I threw, my menu was Italian inspired and well, pizza heavy. For dessert, I wanted something light but some of the dessert ideas I came across seemed too heavy. I also wanted my guests to have fun and I know my friends like to be interactive in the kitchen. So I did some thinking and remembered how much I enjoyed fresh cannoli in the North End neighborhood of Boston. Homemade Cannoli was the perfect dessert for my party menu and to take it a step further, I set up a cannoli bar for my guests to play and make their customized cannolis…

I love incorporating a dessert bar at my parties, especially where I can offer a dessert that will allow my guests some variety and some fun to customize them to their tastes. I set up my cannoli bar with homemade cannoli shells, a few nuts (pistachios and pecans), a couple dipping sauces (mint chocolate and butterscotch caramel) and additional garnishes (chopped chocolate and sweetened coconut.) 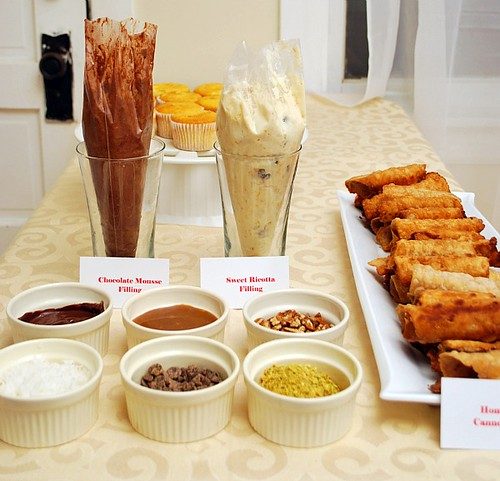 For the cannoli fillings, I had a chocolate mousse filling and a more traditional sweet ricotta filling available (recipes to follow below). But by far, the most time consuming task in preparing this cannoli bar was making the homemade cannoli shells. I had a few recipes to draw from but ultimately decided on one from a fellow blogger that hosted the Daring Bakers challenge. The dough wasn’t too difficult to make and I especially liked the subtle flavor of chocolate and cinnamon. The wine also came through but more as a faint aroma than an actual flavor in the dough. Nonetheless, it was definitely a winner for me. After testing out the recipe a few times before my party, I’m pretty confident about making this and even came up with some shortcut tips!

The original recipe for the dough calls for rolling it out thin and using a large cookie cutter. I found when I followed these steps I ended up with a lot of scraps that really couldn’t be worked into a dough to use again. So instead of rolling out and using a cookie cutter, I just portioned out the dough into the number of cannoli I want to make… and then roll each portion into a ball. This ball is then rolled out into a very thin oval shape that I roll using the cannoli tube. Doing it this way eliminated the amount of waste and the step of rolling out and using a cookie cutter.

Another thing to note is that I happen to like the rustic look of cannoli in that they don’t look exactly alike and aren’t all perfectly rolled out ovals before rolling onto the cannoli tube. To me, the flavor is what matters and after all the garnishing, it doesn’t really matter if the cannoli was perfectly shaped anyway! If you’ve never made homemade cannoli before, here’s a perfect opportunity. It’s fun and oh so delicious…

* I purchased 8 cannoli tubes made by Ateco brand. Look for them at a specialty shop like Sur la Table (where I purchased mine.)

In the bowl of a stand mixer fitted with the paddle attachment, combine the flour, sugar, cocoa, cinnamon, and salt.

Combine the oil, vinegar, and enough of the wine in a 1 cup measuring cup and slowly pour into the stand mixer bowl to make a soft dough.

Allow the dough to come to room temperature. Cut the dough into two pieces. Keep the remaining dough covered while you work. Lightly flour a large cutting or pastry board and divide the dough into 6 equal portions. Roll each portion into a ball in your hands and using a rolling pin, roll the dough until super thin, about 1/16 to 1/8” thick. Roll the dough into an oval, rolling it larger and thinner if it’s shrunk a little.

Oil the outside of the cannoli tubes. Roll a dough oval from the long side around each tube/form and dab a little egg wash on the dough where the edges overlap. Press well to seal. Set aside to let the egg wash seal dry a little.

In a deep heavy saucepan, pour enough oil to reach a depth of 3 inches, or if using an electric deep-fryer, follow the manufacturer’s directions. Heat the oil to 375°F (190 °C) on a deep fry thermometer, or until a small piece of the dough or bread cube placed in the oil sizzles and browns in 1 minute. Have ready a tray or sheet pan lined with paper towels or paper bags.

Carefully lower a few of the cannoli tubes into the hot oil. Do not crowd the pan. Fry the shells until golden, about 2 minutes, turning them so that they brown evenly.

Lift a cannoli tube with a wire skimmer or large slotted spoon, out of the oil. Using tongs, grasp the cannoli tube at one end. Very carefully remove the cannoli tube with the open sides straight up and down so that the oil flows back into the pan. Place the tube on paper towels or bags to drain. Repeat with the remaining tubes. While they are still hot, grasp the tubes with a potholder and pull the cannoli shells off the tubes with a pair of tongs, or with your hand protected by an oven mitt or towel. Let the shells cool completely on the paper towels. Place shells on cooling rack until ready to fill.

Repeat making and frying the shells with the remaining dough. If you are reusing the cannoli tubes, let them cool before wrapping them in the dough. 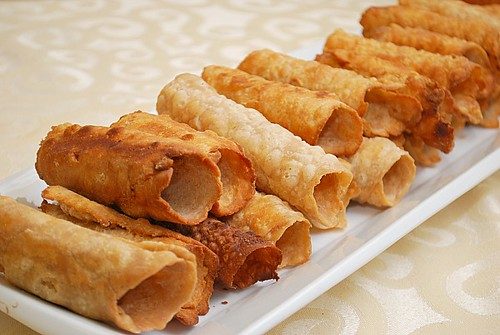 In medium saucepan, combine egg yolks and milk. Heat over low heat, stirring constantly, until mixture is almost boiling and is thickened enough to coat spoon. Remove from heat. Stir in chocolate chips, vanilla and liqueur; continue stirring until chocolate is melted. Cool to room temperature, stirring occasionally. Beat egg whites until stiff; fold gently into the chocolate mixture. Fold in whipped cream. Refrigerate until ready to use.