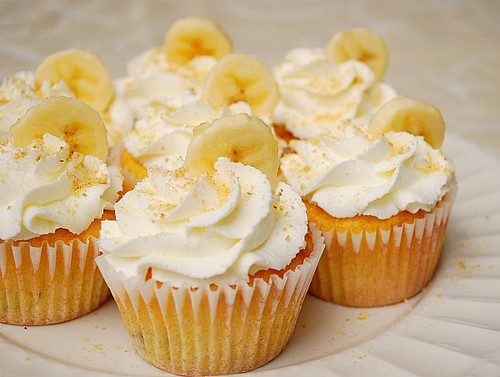 What happens when you gather a group of women together who love to bake and drink? You have a Cupcakes & Cocktails Party! A couple weekends ago, I hosted such a party with a few girlfriends. We each made a batch of some cupcakes to share and enjoyed a few cocktails while we caught up with each other. It’s a great reason for getting friends together… but then again, cupcakes have this crazy way of bringing people together anyway. For our soirée, I wanted to make a cupcake that was a bit more interesting than the usual flavors everyone is familiar with. What I finally decided on were these Banana Cream Pie Cupcakes. Heavenly. They were so light, creamy, and a much easier way to enjoy all the flavors of banana cream pie without a fork!

One of the main reasons why I wanted to make a light and fruity cupcake was to break up the heaviness of the other fabulous cupcakes that came to the party. Joining my cupcakes were flavors including Classic Red Velvet Cupcakes, Chocolate Peanut Butter Frosted Cupcakes, Dark Chocolate Bacon Cupcakes, and even a Cardamom Pear Cupcake. I’ll have pics and recipes of these beauties coming up so stay tuned!  (I figured I’d space them out so we all don’t get a virtual toothache… than is, unless that’s a good thing?)

These cupcakes would be perfect for a picnic or a spring/summertime party. If you have a Southern inspired meal, these would also be a great dessert option. If there’s anything else I’d do to jazz these up, I’d probably also garnish with some toasted almond slices, just like some banana cream pies are garnished. If you would rather make these cupcakes ahead of time, you could also substitute the fresh banana slices with banana chips for garnish.

Preheat oven to 375ºF. Line 24 muffin cups with paper liners. In large bowl, whisk together flour, baking soda, cinnamon and salt. Set aside. In another large bowl, with electric mixer, cream butter with granulated sugar and brown sugar until light. Add eggs, one at a time, then vanilla. Add flour mixture alternately with -bananas and yogurt, mixing on low speed just until moistened. Batter will be lumpy; do not overmix. Gently fold in chopped walnuts.

Fill each muffin cup about three-quarters full. Bake for 20 to 25 minutes, until a toothpick inserted into the center of a cupcake comes out clean. Cool cupcakes 5 minutes in pan, then remove cupcakes to wire rack to cool completely.