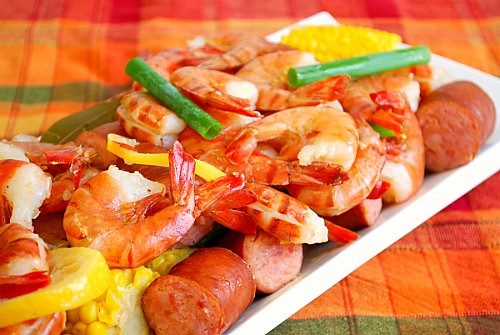 What area of the country or where you live would you like to visit? Is there a type of regional cuisine that draws you in? For me, it’s definitely the South. There’s something about the hospitable vibe I get from the South and the stick to your ribs cuisine that appeals to me. But it’ll be awhile before I get a chance to visit and experience true Southern cuisine. In the meantime, I can only get a taste of the South through food and cooking up Southern recipes. Over the weekend I hosted a Low Country Shrimp Boil, which is a popular past time especially around the Southern coastal regions. Little did I realize how much fun and how easy it was to throw a Low Country Boil and you don’t necessarily have to be in the South to enjoy one!…

Low Country Boils are a very casual dining event where a large pot of seasoned water cooks an entire meal of potatoes, corn on the cob, sausage and of course, lots of shrimp or even other seafood like crawfish. This has to be the ultimate one pot meal for my husband because he loves (like really loves) shrimp! There are many variations to flavor up the broth that cooks up the meal for a low country shrimp boil. For ours, it was a super easy combination of water, sliced lemon, a few bay leaves and classic Old Bay seasoning. You can find old bay seasoning near the fish counter of your local grocery store or in the spice aisle. Some other ingredients I’ve seen used in the broth includes beer, other spice mixes, and aromatics. Have fun with this recipe any time of year. This makes for a great party and a tasty one at that!

Fill a large pot with enough water to cover all of the ingredients. Add the old bay seasoning, bay leaves and lemon slices and bring to a boil.

When the water boils, add the potatoes and sausage. Cook on medium heat for 20 minutes.

Add corn and cook for an additional 10 minutes.

Add shrimp and cook for no more than 3 minutes. Drain and serve with warm bread.