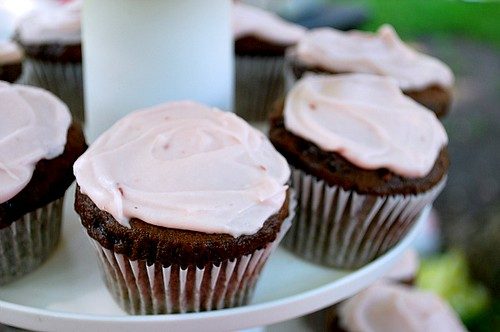 If you give me a pen and a piece of paper, the first thing I’m going to do is make a list. I love making lists. I make lists of lists and list out all the random things that come to mind – errands, grocery items I need, events I’m planning, menu planning, etc. Even better about all my lists is being able to cross things off as I complete them. Sadly, this year I haven’t done very well with a particular list I’ve made. That list is one that includes all the fresh fruits I wanted to go and pick at local farms. Specifically, I missed out on strawberry, blueberry and raspberry picking. My schedule has been ridiculously busy this year and I never got around to making it to the farms… or when I finally had the chance, it was too late and the fruits were already picked over for the season. So the next best thing?… Taking advantage of the produce sales at my local grocery store. This time of year, raspberries are quite abundant and I can’t help but grab a few pints to play with! One thing I made recently with fresh raspberries includes these Chocolate Raspberry Cupcakes. A traditional chocolate cake made with raspberry jam is crowned with a sweet raspberry cream cheese frosting. What’s not to love?!

I made these cupcakes for our annual What’s Cookin, Chicago picnic and they were gobbled up in no time. It seems like once they were displayed on the table, it was a matter of minutes before they completely disappeared! It’s no wonder since these were so so good. Chocolate and raspberries go so well together so it’s only natural this cupcake combination would be a hit. For the cupcakes, I used the traditional chocolate cake recipe found on the Hershey’s Cocoa powder container. Rather than using the whole 1 cup of water originally called for, I used half and substituted the other half with seedless raspberry jam and used raspberry extract instead of vanilla extract to enhance the flavor.

The frosting was the perfect way to top these cupcakes. I used fresh raspberries to make a coulis (a fancy name for fruit puree), which was beat into a mixture of cream cheese and butter. Another touch of raspberry extract was added for more flavor. Depending on how creamy you like your frosting, you may use more or less than the 3-4 cups of powdered sugar called for. Feel free to adjust to your tastes accordingly.

Heat oven to 350 degrees. Line a muffin pan with cupcake liners and set aside.

Bake for approximately 20-24 minutes or until wooden pick inserted in center comes out clean. Cool for 5 minutes; remove from pans to wire racks. Cool completely before frosting. As it cools, prepare the frosting below.

Place butter and cream cheese in the bowl of an electric mixer fitted with the paddle attachment. Beat on medium-high until fluffy. Add the raspberry extract and coulis or preserves and beat until combined. Reduce speed; add confectioners’ sugar and vanilla, beat until well combined.

In a medium saucepan over medium-high heat, bring raspberries and 1/2 cup sugar to a boil. Reduce heat and simmer, stirring occasionally, until mixture starts to thicken, about 15 minutes.

Press mixture through a fine-mesh strainer, using a spatula to extract as much liquid as possible. Discard seeds and skins. Stir in 1 tbsp. lemon juice. Taste and add more sugar or lemon juice if you like. Serve coulis warm or at room temperature. 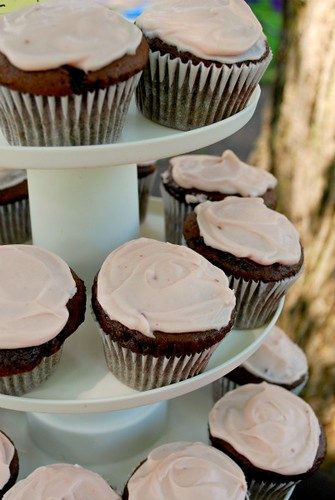