Sometimes the unexpected is better than what’s expected. For the most part, I like to have a well-stocked pantry. Just when I thought I had everything I need and began on a recipe, I quickly discovered that I was out of the key ingredient. What to do?! Well, the only thing to do is to adjust and make some substitutions. In this case, I wanted to originally make a Pork Marsala dish but didn’t have an Marsala wine. The next best thing was to use Sherry so that’s when this dish for Pork in Sherry Mushroom Sauce was born. Who knew this simple substitution would come out better than I expected?! Sautéed pork is tossed in a simple sauce of garlic, caramelized mushrooms, and sherry…

This is definitely a meal you can whip together in 30 minutes or less. After prepping all the ingredients, it doesn’t take long at all for everything to cook up in a skillet. I found the country pork ribs to work best with this dish because there’s a good amount of fat in this cut so the pork doesn’t dry out in cooking. I love the flavor of garlic so I usually add a little garlic powder to my cooking even though minced garlic is also used in the sauce. You can omit the garlic powder if you’re not a garlic fan. To keep things gluten free, I used a slurry of cornstarch and water to thicken the sauce instead of flour. Doing so kept the sauce a nice consistency with a bit of sheen to it too. Overall, this was a delicious weeknight dish, perfect over rice or even potatoes! 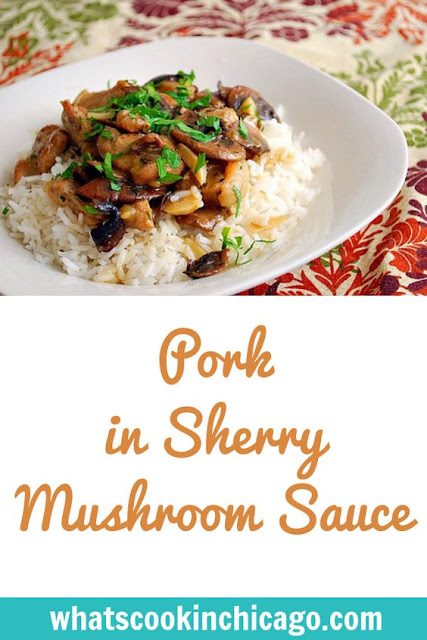 In a large cast iron skillet over medium-high heat, add the canola  oil. Allow the oil to smoke slightly. Season each pork chop with salt, pepper, and garlic powder to taste, and add to the pan. Sauté the pork in the hot skillet until nicely browned. Remove from skillet and set aside.

In same skillet that the pork was cooked in,  add 1 tablespoon of the butter, the shallots, garlic, and the mushrooms. Cook over medium-high heat until slightly caramelized.

Combine the cornstarch and water, mix to a paste. Add this to the skillet, followed by the sherry and deglaze the pan.

Lower the heat, add the beef broth and browned pork; simmer for a  5-7 minutes to ensure pork is cooked through.

Remove from the heat and mix in the remaining butter and the fresh herbs. Once the butter has melted, serve over mashed potatoes or steamed rice.