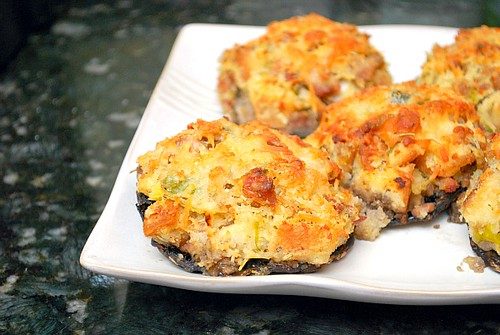 If at first you don’t succeed, try try again. This is one saying that needs to be up on my kitchen walls as a constant reminder. Sometimes when I try a new recipe, I’ll get so psyched with great expectations… only to have a complete bummer on the plate. The most recent ‘bummer’ I had was a stuffing I made for Thanksgiving. I was leery about trying it again for another holiday dinner but thankfully it came out much better the second time around – if not better than I hoped.  I don’t know if it was the toasted {gluten free} bread, savory sausage, leeks or even the portabello mushrooms the stuffing sat upon… but whatever I did, these Leek & Sausage Stuffed ‘Shrooms made me a believer of {gluten free} stuffing once again!

When I made the stuffing for Thanksgiving last month, I used a combination of {gluten free} breads and herbs. I had high hopes but it really didn’t come out as I wanted. I was a bit disappointed because stuffing is one of my favorite side dishes of Thanksgiving! Then our good friends hosted a Thanks-mas holiday dinner (one held between Thanksgiving and Christmas) this past weekend. One of the special requests for the dinner was a gluten free stuffing, since it was the host’s favorite part of a Thanksgiving meal. I was a bit hesitant to make stuffing again but this time, it came out perfect.

Instead of baking the stuffing in a large casserole dish, I opted to bake the stuffing on top of portabello mushroom caps. This allowed me to get some earthy mushrooms incorporated and they served as a great way to portion out the dish. It’s just like a giant stuffed mushroom as a side dish! 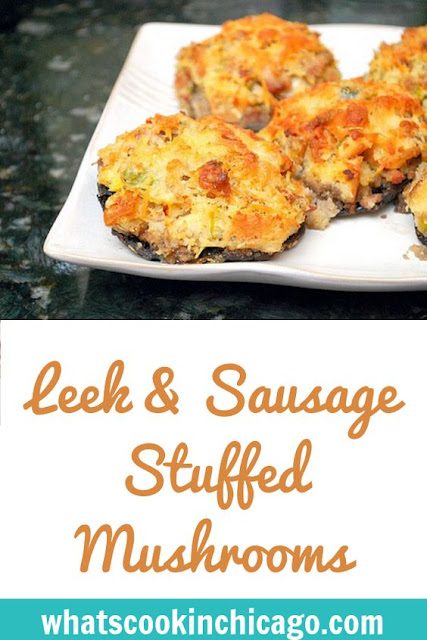 Place the diced bread into a large container for mixing. Drizzle bread with olive oil, toss to coat and transfer bread onto a large cookie sheet. Bake in preheated oven for 20 minutes or until toasted. Transfer toasted bread to a large bowl for mixing. When bread has finished toasting, lower the heat to 350 degrees and keep the oven turned on.

Meanwhile, in a large skillet over medium high heat, crumble mild Italian sausage into the pan. Add minced garlic and leeks. Sauté until sausage has browned and leeks have softened.

Place the stuffed mushrooms onto a parchment lined baking sheet. Bake uncovered in the 350 degree oven for 20-25 minutes until tops have browned. Remove from oven and serve hot.