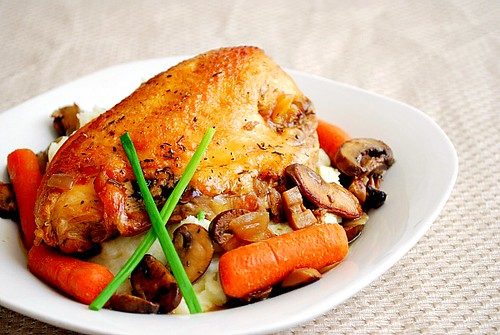 If there’s one small kitchen appliance I’m in love with right now, it’s my slow cooker. It’s helped make my weeknight dinners easier by having things hot and ready by the time I get home. Now as much as I love my slow cooker, there is one ingredient that I will never, if not rarely, put into my slow cooker. That ingredient? Well, that would be canned condensed cream soups. Often times, they are used in slow cooker recipes and it just isn’t an ingredient I keep in my kitchen. And for those that associate slow cooker recipes with cream soups, there are recipes out there that don’t need the extra sodium from those cans! This Slow Cooked Chicken with White Wine Mushroom Sauce is a dish that has no canned cream soup involved and it’s every bit delicious. Bone in chicken breasts are seared to a nice brown before being nestled into a bed of carrots and a flavorful sauce of white wine, chicken broth, garlic, onions and caramelized mushrooms. It cooks up in a few hours until the chicken is super tender and moist…

The original recipe comes from Cook’s Country and involves adding cream to the finishing sauce. I opted to omit the cream and instead, thicken the sauce with a slurry of cornstarch and water. The finishing sauce turned out to be an amazing gravy that tied the dish together when served on top of Parmesan & Chive Mashed Potatoes {recipe follows below.} If you don’t have bone in chicken breasts, you can easily use bone in chicken thighs as a substitute. Not a fan of bone in chicken? Use boneless chicken breasts but reduce the cooking time by half so that the chicken doesn’t overcook.

Dry the chicken with paper towels, then season with salt and pepper.

Add the remaining 2 teaspoons oil to the empty skillet and heat over medium heat until shimmering. Add the mushrooms, onion, and 1/4 teaspoon salt. Cook until the mushrooms are brown and slightly caramelized, 10 to 15 minutes. Stir in the garlic and cook for 15 seconds. Stir in the wine, scraping up any browned bits, and simmer until reduced by half, about 5 minutes. Pour into the slow cooker.

Add the broth, thyme, and bay leaves to the slow cooker. Add the carrots into the slow cooker and top with the previously cooked chicken. Cover and cook on low for 6-8 hours or high for 4-6 hours, until the chicken is tender.

Transfer the chicken to a large serving dish and tent loosely with foil. Discard the bay leaves. Transfer the cooking juices to a small saucepan over high heat. Whisk together the cornstarch and cold water to create a slurry. When the cooking liquid begins to boil, remove from heat and stir in the cornstarch/water mixture. Thie cooking liquid will thicken to a gravy consistency. Stir in the tarragon and lemon juice, seasoning with salt and pepper to taste.

Serve the sauce over the chicken and/or on the side.

Drain the potatoes in a large colander and return to the empty pot. Place over low heat and mash the potatoes until any liquid/water has evaporated.

Preheat the oven to 350 degrees.

Remove the pot from stove and add 2 sticks of butter, cream cheese and warmed half & half to the mashed potatoes. Continue mashing until fully incorporated.

Add the seasonings, chives and Parmesan, folding them in. Transfer the mixture to an oven-proof 9×13 serving dish and top with slices of the remaining butter.

Bake uncovered in the preheated oven for 20-25 minutes or until potatoes are warmed through.

To make ahead/freezer meal: Prepare the dish above up until it gets baked in the preheated oven. You can wrap and cover the dish to refrigerate up to 3 days before serving. When ready to bake, preheat the oven, cover the dish and bake per recipe above.