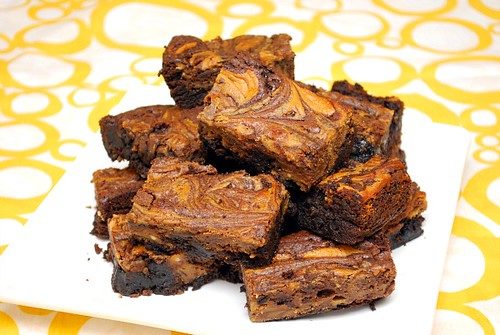 I’ve succumbed to the trend… that is Biscoff. If you have yet to hear or experience the deliciousness of Biscoff, you are missing out. What is Biscoff? Well, they are similar to shortbread, tea or biscuit cookies with caramelized flavor kissed with cinnamon and gingerbread notes. They’re extremely popular abroad and are often enjoyed with tea. The folks of Biscoff had the genius idea of making a spread by crushing these cookies. The spread is very close to peanut butter and as addicting as Nutella (if not, moreso.) Aside from enjoying it on its own, the spread is especially good with chocolate. That’s when these Biscoff Swirled Brownies found their way into my oven. A classic fudgy brownie is introduced to a Biscoff cream cheese swirl that’s baked right in with European flair…

Let’s start this off by saying this is NOT a gluten free recipe. Because the Biscoff spread is made out of gluten laden cookies, all my GF friends will have to sit this one out until the Biscoff folks make a gf version. Shamefully, I admit overlooking my gluten intolerance/sensitivity for this recipe… but wow, it was worth it. I had a taste of the Biscoff spread itself and had to fight hard to resist having more. The Biscoff spread is combined with softened cream cheese, an egg and some sugar to create a cheesecake like batter that’s swirled into the brownie batter.

The brownie portion of the recipe is easy to prepare as gluten free (just use the gluten free flour blend in place of the all purpose flour called for). But the recipe is flexible since you can substitute the Biscoff spread for peanut butter or even nutella.

Not sure where to get your hands on Biscoff spread? Look for it at World Market retail stores or if you have a Trader Joe’s in your area, pick up their version called ‘Speculoos: Cookie Butter.’ The most important thing… get your hands on them. Like, as in yesterday.

In the bowl of a stand mixer, combine all the ingredients for the swirl batter and set aside.

In a large bowl, combine the cocoa, salt and baking powder and set aside.

In a large saucepan, melt the butter over low heat.  Turn off the heat and add the sugar, stirring to combine. Return to the heat until it’s hot again, but not boiling. Remove from heat.

Stir in the cocoa mixture. Whisk in the eggs and vanilla until smooth. Stir in the flour.  Pour into the prepared pan and smooth evenly.

Dollop the Biscoff mixture on top of the brownie batter. Use a table knife to gently swirl the mixture, making sure each piece with have a little bit of the swirl.

Bake for 30-35 minutes.  The swirl will look set, but the brownies will still look soft in the middle.  Cool on a wire rack before cutting.