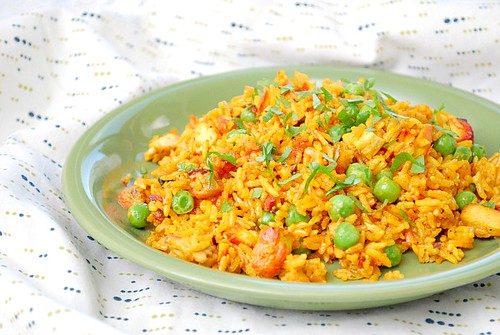 If there’s one ingredient I can transform from “blah…” to “bam!”, it would be rice. I credit the fact that I grew up eating rice three times a day and sometimes, for snacks in between meals. It wasn’t just considered a side dish or starch to our meals, but rice was used in some form in appetizers, entrees and even desserts! So if anyone knows anything about working with rice, I proudly raise my hand. By far, my favorite use for rice is involving leftovers. I transformed some Indian leftovers into this comforting, one pot dish – Chicken Tikka Masala Rice. Tender and flavorful chicken simmered in a spicy Tikka Masala sauce is tossed with garlic fried rice.

I helped my mom in the kitchen at a very young age. Since her kitchen was my playground, I loved when she would give me the task of measuring out the rice to cook in our rice cooker. We had a special rice dispenser that had levers that accurately measured rice in various amounts. Pulling those levers and watching the rice pour out in just the rice portions was fascinating to me. I fondly remember feeling the rice through my fingers as they filled up the rice cooker pot. Now, being in charge of rice was an important task. That was my role in the kitchen for a long time and it was always something I looked forward to. And one thing I made sure of each time I made rice was to cook a little extra just so we would have leftovers.

So why the love of leftover rice? It’s because any leftovers usually found their way into garlic fried rice. The same still stands true in my own kitchen today. So when I had leftover rice waiting to be used… and I had leftover Chicken Tikka Masala from a previous dinner, it seemed like combining the two would be a delicious idea… and a delicious idea it was! I love how the chicken tikka masala flavor had intensified slightly with leftovers. The toasted rice complimented the flavors of the chicken tikka masala, making for a comforting dish!

In a large skillet over medium high heat, add oil and saute garlic and onion until softened.

Add rice along with the spices to your taste preferences and cook until rice is slightly toasted.

Chop up any large pieces of chicken in the tikka masala.

Add the leftover chicken tikka masala to the skillet with the rice and fold in to thoroughly combine. Add the frozen peas and allow to heat the dish up. Garnish with chopped cilantro and serve.