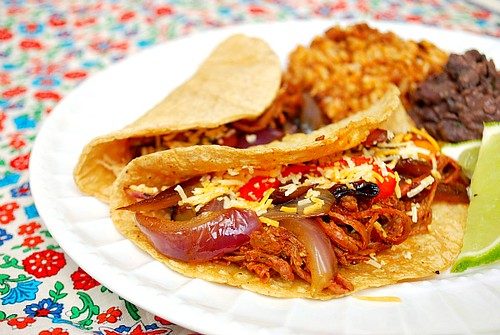 How often do you have dinner waiting for you when you get home? For me, not often enough. But I’m not complaining… because that’s just my own fault for not plugging in my slow cooker! This time of year I’ve been embracing my slow cooker to make dinner to save me time during the weeknights. In fact, I recently made these Chipotle Pork Carnitas which was delicious to come home to after a long day. Pork is slow cooked for hours in a simmering sauce of chipotle peppers, tomatoes, and spices until fork tender, making for a flavorful filling for tacos…

The Baron and I  recently planned on having dinner out for some Mexican fare. However, The Baron needed to stay close to home and be accessible to a computer at a moment’s notice for work. So instead of going out to dinner or getting take out, I made dinner instead. This turned out to be a great dinner, probably better than a restaurant or picking something up! The pork cooked for hours and the only thing we had to do was prep some taco toppings and sides. I served the pork in warmed corn tortillas and caramelized onions and bell peppers. Chorizo rice and smashed black beans rounded out the meal perfectly. You can use this pork for burritos, quesadillas, enchiladas, etc and because it yields quite a bit, you’ll be able to make quite a few things, enjoy leftovers or serve it up to a small army!
Chipotle Pork Carnitas
recipe from Food

In a dutch oven, heat the oil over medium high heat. Sear the pork shoulder on all sides until it is browned. Remove the meat from the pot and set aside.

Add the onions to the same pot and sauté until softened and lightly browned on the edges. Add the garlic and chipotle peppers and stir. Add  the tomatoes and liquid, bay leaves, oregano, cumin, cloves, and water. Scrape up the bottom of the pot. Transfer mixture to a slow cooker. 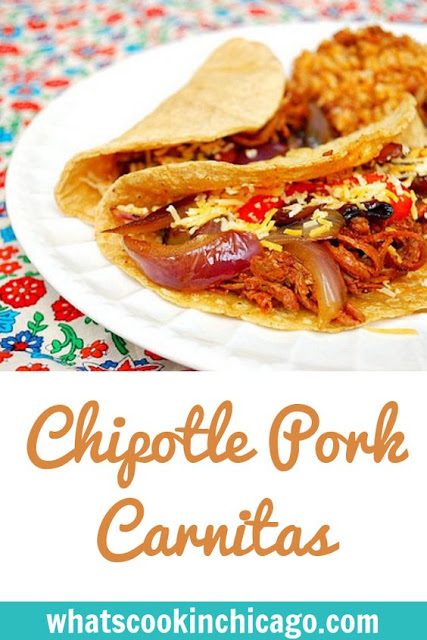