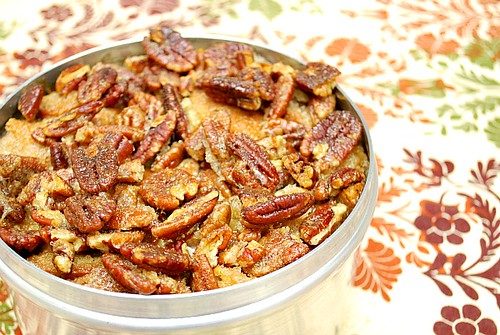 Are you more of a morning or evening/night person? I used to be a night owl for several years but now, I’m definitely a morning person. In fact, on most nights lately, sometimes staying up past 10pm is a challenge! As a result of being a morning person, I’ve grown more fond of breakfast dishes. The Baron and I were talking about breakfast dishes the other day and he mentioned he really likes French Toast. With that as inspiration, I decided to make this Caramel Pecan French Toast Casserole. Toasted, cubed bread is soaked overnight in a delicious custard of eggs, milk, half & half, sugar, vanilla, and spices before baking with a sweet and crunchy topping of butter, sugar and pecans. Hold the maple syrup… because this is perfect as is!

I’ll never forget the first time I ever made a french toast casserole. I think it’ll go down in the books at the absolute worst cooking/baking experience ever because of the time and effort I put in only to throw it all away. I made an overnight french toast casserole as noted in a recipe. The next morning, I baked it and waited anxiously for this glorious dish to come out of the oven. Well, it never came. Instead, I got a casserole dish of mush and it was so bad and inedible, I threw it out. Since then, I’ve been leery about french toast casserole recipes. Thankfully, this one was wonderful and it’s regained my faith lol. The bread soaked up the rich custard and baked beautifully. However, my favorite part was the topping. It really adds a nice texture and went perfectly with the french toast flavor. 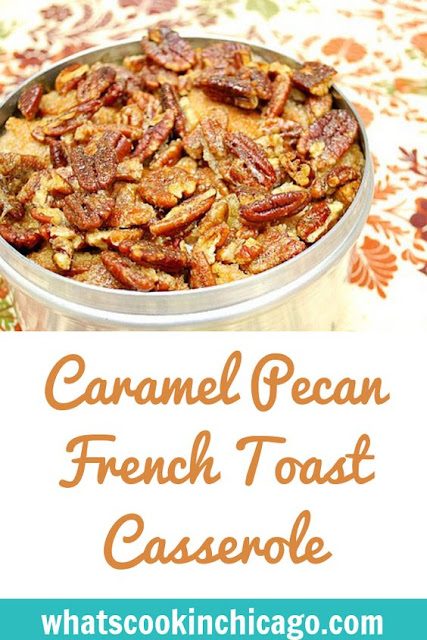 For the casserole: Adjust two oven racks to the upper and lower-middle positions and heat the oven to 325 degrees. Arrange the bread in a single layer on two baking sheets. Bake until dry and lightly golden, about 25 minutes, rotating the baking sheets front to back and top to bottom halfway through the baking time. Allow the bread to cool.

Grease the bottom and sides of a 9 by 13-inch baking dish (or casserole dish of similar size) with butter. Layer the baked bread tightly in the prepared dish (you should have two layers). Whisk together the eggs, milk, half-and-half, sugar, vanilla, cinnamon, and nutmeg and pour evenly over the bread. Press lightly on the bread to submerge. Cover with plastic wrap and refrigerate for 8 to 24 hours.

For the topping: When ready to bake, adjust an oven rack to the middle position and heat the oven to 350 degrees. Mix the butter, brown sugar, and corn syrup together until smooth, then stir in the pecans.

To assemble and bake: Remove the casserole from the refrigerator and unwrap. Spoon the topping over the casserole, then spread it in an even layer. Place the dish on a rimmed baking sheet and bake until puffed and golden, about 60 minutes. Cool for 10 minutes before serving.