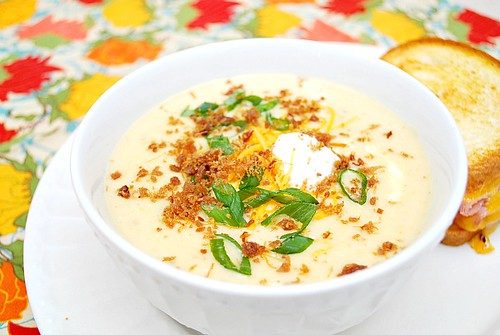 Inspiration comes from anywhere… where do you get yours? When it comes to meal planning, The Baron and I will often work together on coming up with meals. Usually meals are based on things he likes, dishes we’ve drooled over while watching Food Network or episodes of Kitchen Nightmares, No Reservations, etc. This time, The Baron made mention of having potato soup the other day. From a can. Not that I have anything against canned soup {Lord knows I’ve eaten my share growing up and in college}, but he hasn’t had a from scratch baked potato soup. I took that as an opportunity to make this Loaded Baked Potato Soup that’s rich, velvety and cheesy with chunks of potato, garnished with crumbled bacon, a dollop of cool sour cream, scallions and shredded cheese for good measure. I think it’s safe to say we kicked the {soup} can after having a bowl of this!…

I love potatoes, even more so now that I’m gluten free. So making this soup was the perfect chance to use up some potatoes I had. It’s also the best time of the year for soup since this one is particularly comforting on a chilly day. You can top this soup with whatever you’d normally top a baked potato. Some other ideas include chopped steamed broccoli, sauteed mushrooms and caramelized onions, even leftover chili would work well! This soup is obviously delicious on its own but you can use it as a blank canvas to highlight your favorite baked potato toppings. Yum… 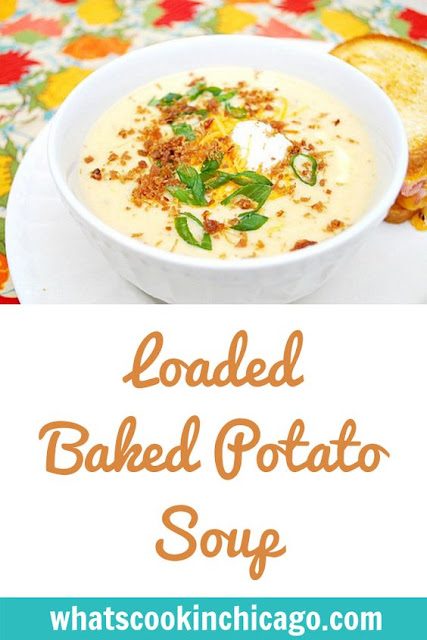 In a Dutch oven, cook the bacon over medium heat until crisp. Remove from pot, crumble and set aside.

Add the onion to the fat remaining in the pot and cook until golden, about 6 minutes.  Stir in the garlic and {gf} flour and cook for about 1 minute, until the garlic is fragrant. Whisk in the chicken stock and cream to the pot. Add the thyme and potatoes; stir. Bring to a boil over high heat then reduce to the heat to medium-low, cover the pot, and cook until the potatoes are tender, roughly 10-15 minutes.

Remove about 2 cups of the cooked potatoes to a bowl. Puree the remaining soup with an immersion blender in the pot {or in batches with a regular blender.} Return the pureed soup to the pot and off the heat, stir in the cheese until completely melted, then add the sour cream.  Season the soup with salt and pepper. Add the reserved potatoes and stir.