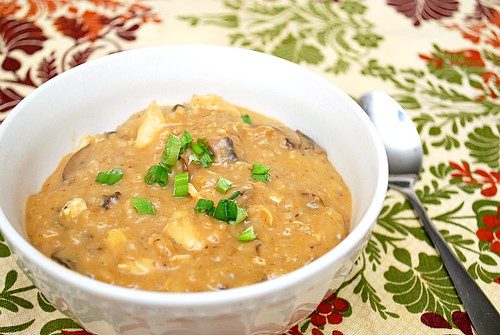 Soup is one of those things I especially enjoy during the cooler months. Usually I’ll make a big pot of soup every other week or so but I will often get my soup fill when we dine out. I recently visited a Panera Bakery Café with Joel and we enjoyed all the varieties they offered at any given time. When we were there, they had roughly six or seven soup offerings to choose from. Joel and I decided on the Cream of Chicken and Rice soup, which was delicious! In this soup, long grain and wild rice, celery, onion, carrot and diced chicken was simmered in chicken broth and then embellished with cream and herbs. How could it not be good?! In fact, Joel and I enjoyed the soup so much that Panera Bakery Café inspired me to go home and make more soup. {That and Joel expressed how much he liked it and wanted more lol!} So with full bellies of soup and inspiration in mind, I made this Cream of Mushroom Soup with Chicken & Rice. Similar to the Panera soup we had, this one includes mushrooms, making it rich with flavor…

Panera is one of my favorite cafes because they have such a great offering of good eats. From Sandwiches, salads, soups, pastries and even coffeehouse drinks, they have it all. This soup is all about good ingredients going in, which fit with Panera’s ‘Good Goes In’ philosophy. Their philosophy means they pay attention to the quality and wholesome goodness in all their dishes and it’s evident in the soup we had. Joel is a fan of rice, especially in soup. I knew he’d love this, especially after seeing how he devoured the soup at Panera! 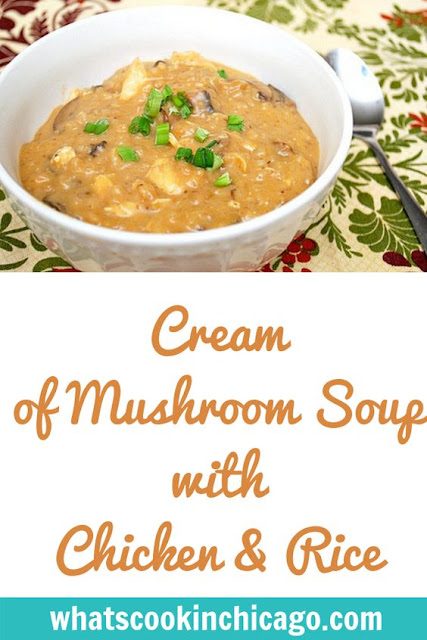 This is a sponsored post written by me on behalf of Panera Bread as part of the
DailyBuzz Food Tastemaker Program. All opinions are my own.