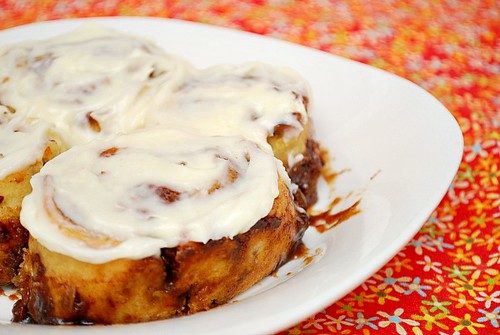 The weekend is almost here – yes! Any fun plans for you in your corner of the world? For me, it’s a fully-packed weekend to make new friends and catch up with long time friends. We’ve got a day trip in Milwaukee to check out a science fair and hang out at the children’s museum up there. Then on Sunday, we’re having a long-awaited dinner with some friends from Chicago. Now with so much going on, the best way to start a weekend is with a delicious breakfast. If you’re looking for something to make, how about these Cinnamony Cinnamon Rolls? I made them last weekend and wow. They were AH-mazing. A soft and buttery dough is rolled and filled with a mixture of brown sugar, vanilla and cinnamon chips before baking up and slathering with rich cream cheese frosting. How can anyone resist these glorious rolls of cinnamony deliciousness?

I could have just went without the addition of cinnamon chips, but why not go all the way? If you are unable to find Hershey’s cinnamon chips in your area, no worries – just omit them. But if you can find them, be prepared for little bursts of cinnamon sweetness with each bit of these rolls!

I adapted the original recipe as gluten free using a gluten free flour blend and the nice thing about GF baking is that when it requires proofing, gf baked goods only need one proof. So after making the GF dough, I was able to roll it out, fill and allow them to proof. If you are making the standard recipe with all purpose flour, you will need the proofing time after you make the dough and before you rolling it out to fill… and another proof after you’ve filled and cut the rolls. Not giving the dough enough time to proof will result in a tough roll that probably won’t taste very well…. so note that you need patience with this! But is it worth it? Oh yes… yes it is indeed!