Potatoes are a staple in my kitchen and after awhile, mashed potatoes as every side dish to meals can get pretty boring. So I decided to make these Twice-Baked Sour Cream & Chive Potatoes to pair with a prime rib dinner… and these were a hit! Soft, creamy and fluffy mashed potatoes swirled with sour cream and snipped chives fill up potato halves for a delicious presentation…

What I really enjoyed about these potatoes is that they were great to make ahead. I baked the potatoes a day before, cooled and then scooped out the insides. I made the sour cream and chives potato mixture, filled the potato halves and then wrapped them up to bake up later. Another great thing about this recipe is you can pretty much stir in additional ingredients like cheese, crumbled cooked bacon, scallions, etc… the sky’s the limit! So if you’re getting tired of the same old mashed potatoes, try making these ahead of time and with your own spin! 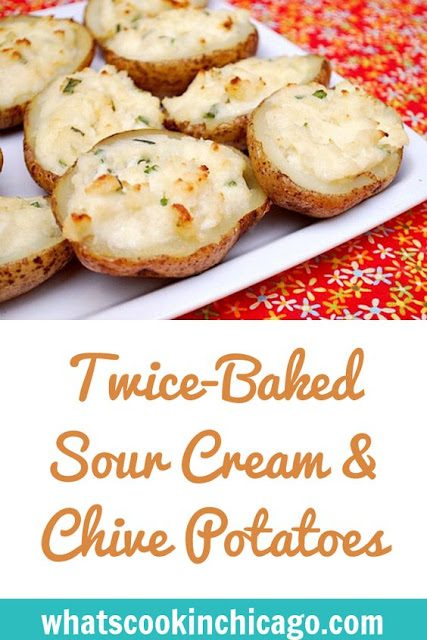