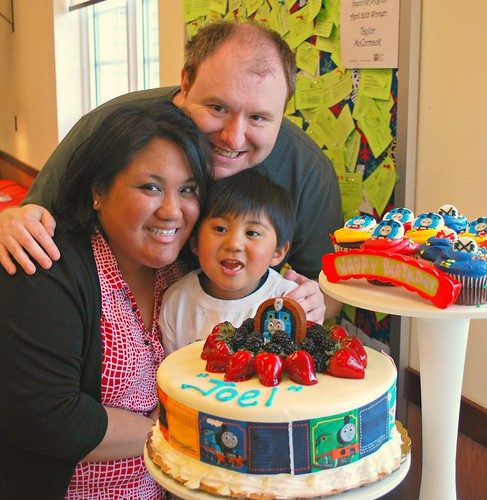 Today is a very special day. Three years ago today, I found myself in the hospital having a baby a whole month early.  He was in my arms at 35 weeks and 5 days, weighing in at only 4 pounds, 15 ounces and 18.5 inches long. Joel remained in the Neonatal Intensive Care Unit {NICU} for a week before I was able to take him home. Life has never been the same since and is continually full of love and laughter with him in it. 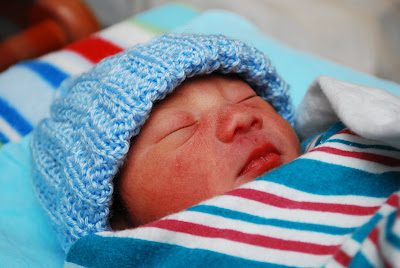 Those that know me really well understand my love of birthdays – especially Joel’s. After having been told years prior that I wouldn’t be able to bear children, I accepted the reality. But then, my miracle baby came. Now I fully celebrate Joel’s existence, for him being alive, well and healthy on his birthday. It does help that my birthday is exactly a week before lol. And since I love to entertain, our birthdays are no exception! 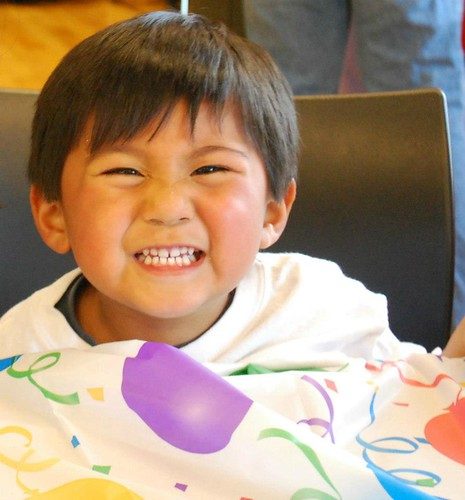 This year, it seemed pretty obvious that my little Thomas the Train fanatic would have a birthday centered around his favorite little engine…

For his birthday, he decided to have a Thomas the Train themed party, naturally. I mean, Joel is a hardcore fan. Just take a look at his bedroom… {and he’s gotten a lot more Thomas the Train stuff since this picture was taken several months ago}:

This past Saturday was when I hosted his 3rd birthday party. Joel took a very active role in helping me plan his party too. He helped picked out decorations, favors, activities, etc. It made for great mom and son bonding time! For his invitations, I used a picture from Halloween last year when Joel dressed up as a train engineer/conductor. An Etsy seller helped to create the invitations in the shape of a train ticket.

The venue was our local park district community center, which we pretty much had all to ourselves. It was great to have ample space both indoors and outdoors for all our 60ish guests who attended. The beautiful weather certainly helped! 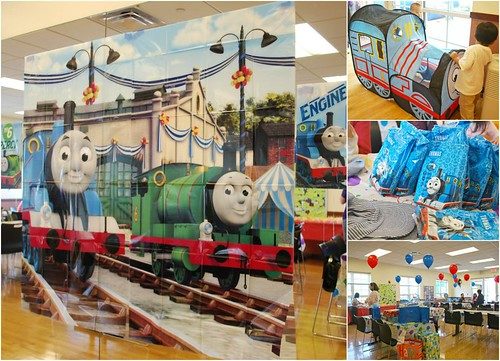 For food, we took inspiration from fair/carnival eats. I had a commercial popcorn machine which made the party smell amazing. To add some fun to the popcorn, I used some delicious popcorn seasoning from Urban Accents. My mom made some Filipino empanadas filled with beef and vegetables. The Baron’s mom, Marnee, brought some fresh and colorful fruit and vegetable platters with The Baron’s favorite spinach dip. We also had nachos where folks could top them as they wanted. And per Joel’s request, we had lots of pizza. 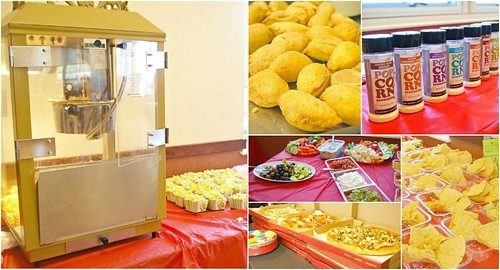 Our sweets table and cake display has a pretty memorable story. As we were setting up the party room, Joel wanted to be helpful as he usually is. All of us who were working on decorating, setting up food, etc were so busy to notice that Joel was near the table that had his birthday cake on top. Even more so, we didn’t think he was able to reach the cake since it was clearly well out of his reach… so we thought. Then out of nowhere, I heard a ‘PLOP!’. Followed by an ‘Uh oh!’ I turn around and there stood Joel. With his birthday cake turned upside down on the floor.

Needless to say, my mom and The Baron went out to quickly get a replacement cake. After attempting 3 nearby grocery stores with no luck on such short notice, my brother and his partner went out to look for a cake. Now I was down 4 people to help me set up and the party was soon to start with folks already trickling in. Gah!

My brother and his partner definitely saved the day and brought back the cake pictured below. We thought it was funny that Joel’s name was placed in “quotes” – not sure why either lol. I had these edible images to put on the sides of the cake to work with the theme, so that helped. Even the fresh and colorful blackberries and strawberries worked well. To finish it off, I had a Thomas the Train candle which looked perfect set in the middle of the pile of fruit. The cupcakes I got through a local bakery, which were half chocolate and half yellow. I topped the cupcakes with Thomas the Train candy decorations too. For a little whimsy, I also picked up this light up musical cake topper which we placed with the cupcakes. 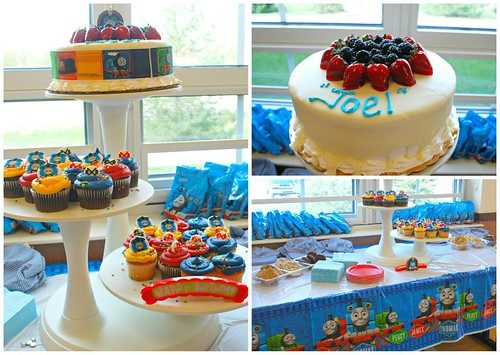 The weather was gorgeous on his party day. I was thankful that despite the rain we got the day before, I was able to have a large Train bounce house for the kids to play in. The kids loved it and could jump and bounce as much as they wanted. The adults and parents loved it because it’s like the ultimate pack and play where the kids could be contained. It was a win win for everyone and I wouldn’t hesitate getting a bounce house again for future parties. Another great thing about the venue is that steps away from this area pictured is a nice enclosed playground. The kids and adults had a lot of freedom to roam and play, which is a great bonus when you have 20+ kids with lot of energy around. 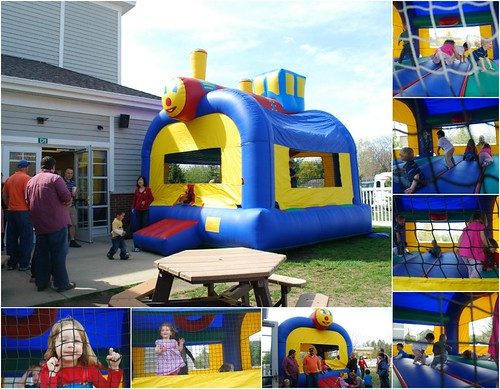 I was so glad to see everyone having a good time and Joel doing a great job as a party host/guest of honor. He made his rounds to talk to everyone! I loved that he visited every table to say hi and to thank people for being there on his special day. And everywhere I looked, there were smiles all around… 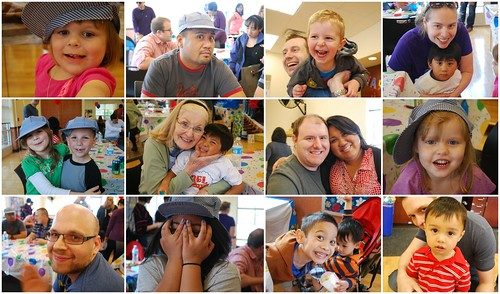 To incorporate an activity aside from the bounce house and playground, Joel picked out a Thomas the Train pinata. I opted for a pull string Thomas the Train pinata which was much safer for the kids and adults. The kids had a lot of fun pulling the strings and when the right string was pulled, everyone rushed to grab the candy that fell out. It was a lot of fun to watch the kids get so excited! 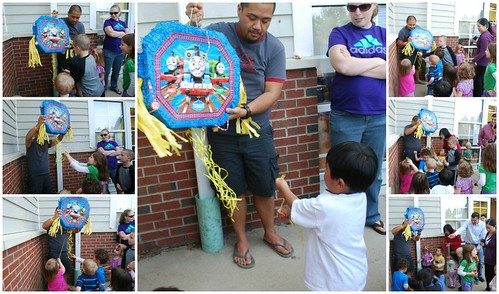 Then it was back inside for cake! Joel gathered everyone inside and said a few words of thanks to the room full of family and friends that came to celebrate his birthday. Once the candle was lit, I couldn’t help but look at the cake laughing to myself at what brief chaos it caused lol. We all sang Happy Birthday to Joel, he blew out his candle. 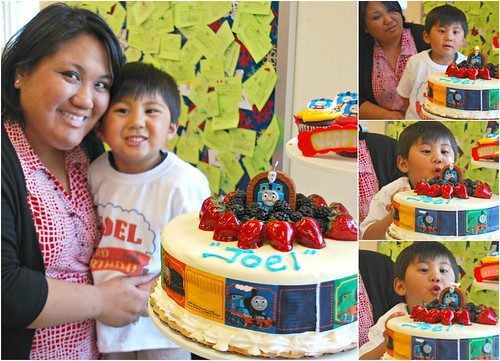 While folks were enjoying cake and cupcakes, we passed out the birthday favors to everyone. The kids seemed to love the goodies and the hat, which many of them wore for the remainder of the party. Us adults and parents did our best to gather up as many kids in front of the Thomas the Train mural for a group picture… but that clearly wasn’t going to happen. Instead, here’s a few pictures I managed to get lol… 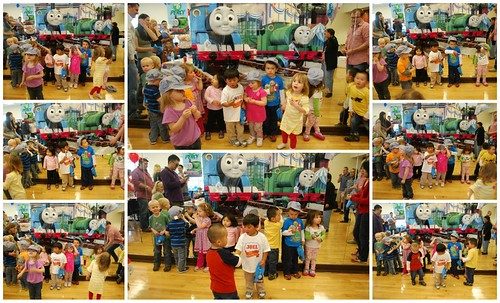 I did manage to get this group picture of Joel and some of his friends! They obviously enjoyed the afternoon with us… 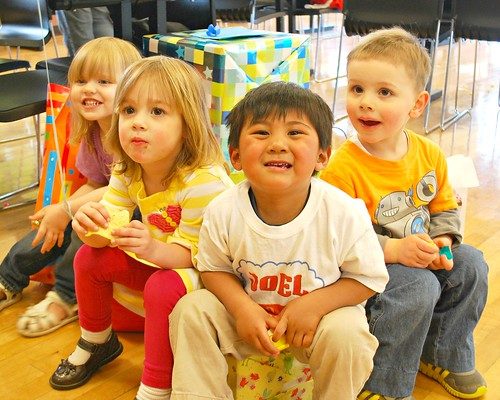 Then it was time to say our goodbyes. As our friends and family left, Joel wasn’t shy to send them off with hugs. And lots of them! 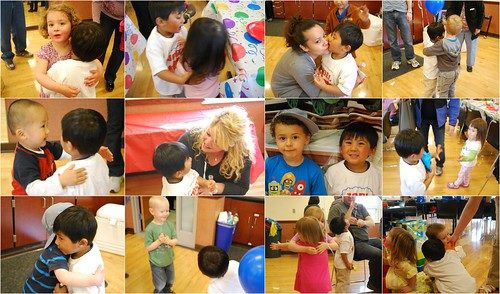 Some folks open gifts towards the end of the party but I found that it to be difficult to keep a room of so many toddlers still and engaged while someone else is opening presents. So instead, we decided it would be best to bring the gifts home and open them there.

After the party, we went home and had Joel play in his room while we set up the living room so he could open up his gifts. When we were ready to bring him out. he was so stunned to see his presents all over the room… and I was so incredibly grateful for our friends and family who were so generous.

By this time of the day, Joel was already winding down. He was getting tired from opening the gifts… and he received plenty of new Thomas the Train goodies to add to his ever growing collection lol. 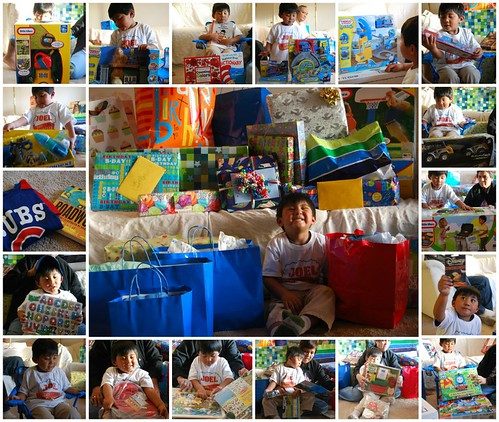 Shortly after the last gift was opened and everything was cleaned up, we went out to dinner. There was no way anyone was stepping foot in the kitchen to cook after such a long and eventful day. We went to a  place not far from home and within 10-15 minutes into dinner, Joel fell asleep at the table.

Yep, my little baby boy is growing up so fast… and I’m already looking forward to the fun year ahead to make new memories, hit some milestones and enjoy every single day Joel fills my life. I often tell Joel this:

“Out of all the kids in your class at daycare, amd in your entire school and all the schools around the world… and even the kids playing your school playground, in our favorite park and in all the parks and playgrounds around the world… and out of all the little boys and girls that live near us and very far away.. there is only one little boy I love so very much and want to be a mommy to. Do you know who that is, Joel?…That little boy is you and only you.” 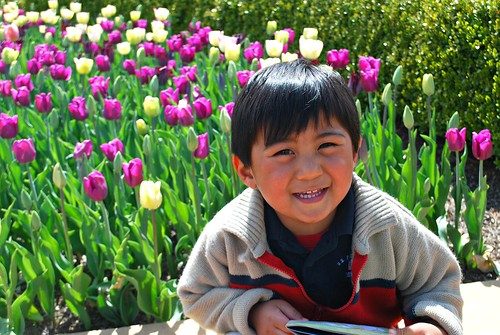