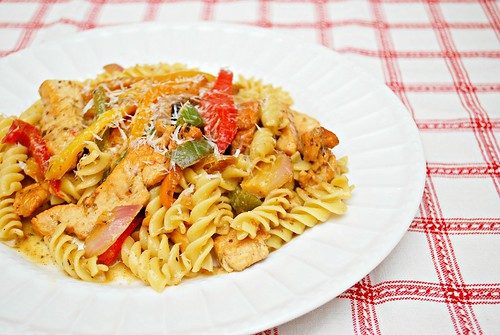 Do you get excited when there’s a sale? Whether it’s at the grocery store, the mall or even online, I kind of get a surge of excitement especially when it’s for something I’ve been coveting or items that I usually buy regularly. Well, last week I scored a huge deal on bell peppers. Huge! Needless to say, I came home with far more bell peppers that I have recipes for… well, at least, at that time lol. So in an effort to use them up, I’ve been on a search for recipes calling for bell peppers. One of the recipes I came across was this Cajun Chicken Pasta. Colorful strips of bell pepper, red onion and garlic is cooked with chicken in a spicy white wine pan sauce and tossed with pasta for a satisfying and colorful meal…

This meal was really good and I loved how easy it was to put together all in one skillet [with the exception of the pasta that was cooked in a separate pot]. It’s like the flavors were built on top of each other as the vegetables and chicken were cooked through in the pan… and then the white wine used to deglaze the pan captured every bit of flavor to tie it all in. To make this richer, the original recipe called for heavy cream but I ended up omitting that since I didn’t have cream on hand. Since Joel doesn’t care to spicy foods, I also omitted the cayenne pepper on his portion and he loved it… so you can omit the cayenne all together if you don’t care for the kick of spice.

Cook pasta according to package directions. Drain when pasta is still al dente; do not overcook!
Season the chicken with cajun spice along with salt and pepper to taste.
Heat 1 tablespoon oil and 1 tablespoon butter in a skillet over medium high heat. Add half of the chicken and brown on both sides. Transfer cooked chicken to a plate and keep warm. Cook the remaining chicken and transfer to the plate when browned.
Add remaining olive oil and butter to the now empty pan over medium high heat. Add peppers, onions, and garlic. Season with Cajun spices, salt and pepper to taste. Cook  vegetables until softened.
Return the chicken to the pan and add the wine and chicken broth, scraping up the bottom of the pan to deglaze.
Season dish with cayenne pepper and toss to combine.
To serve, garnish with freshly grated parmesan cheese if using. 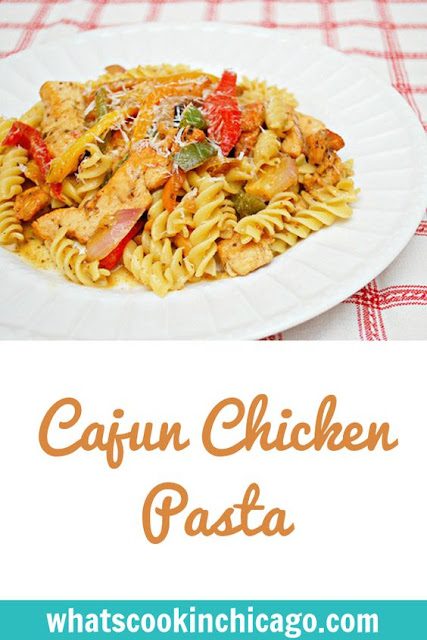