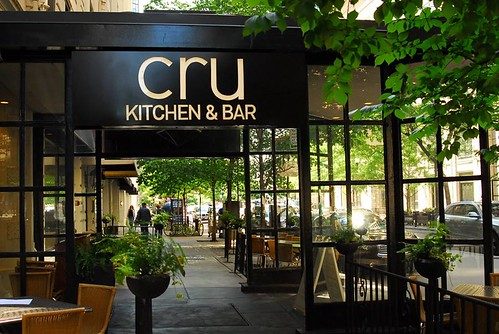 We dine out fairly often – at least once a week. Usually for our weekly Friday date nights, we’ll hit up a local independent restaurant in the suburbs or occasionally go into the city for the plethora of dining options. But after a long day teaching back to back culinary classes in our downtown Chicago kitchen, the Baron and I spent our evening relaxing in another kitchen… CRU Kitchen & Bar. Hands down, this was probably one of the most memorable dining experiences we’ve had recently. 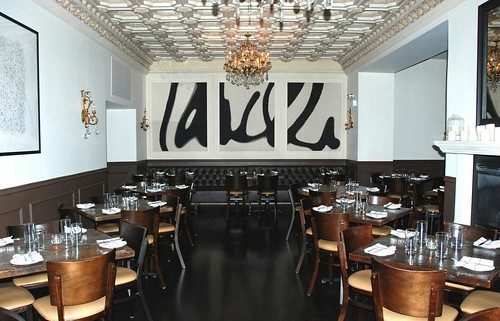 But let’s back up a bit. Earlier in the day I was teaching 3 classes back to back so I was pretty beat. It was so great to pick up the Baron from the train station and spend the evening out together. We headed towards the restaurant, which was in the heart of the Gold Coast neighborhood of Chicago, just a few blocks off of Michigan Ave. Parking was a breeze on a Saturday night {oddly enough} and the restaurant was classy with a welcoming hostess to greet us. We were seated and shortly after, we met our server Anthony and bar manager, Ben. Between the two of them, they really made our visit wonderful. 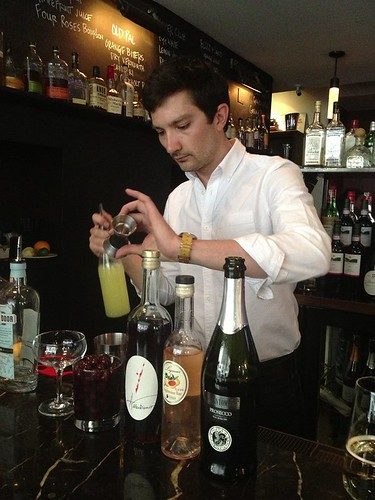 Ben started us off with drinks. The Baron went with a oatmeal stout beer and I took Ben’s recommendation of a seasonal Pimm’s Cup. The Pimm’s Cup is a popular British and American drink, especially at tennis matches. Mine included fresh berries and a touch of citrus, which was delicious! The Baron also enjoyed his beer and was impressed with the selection they had available.
Pimm’s Cup 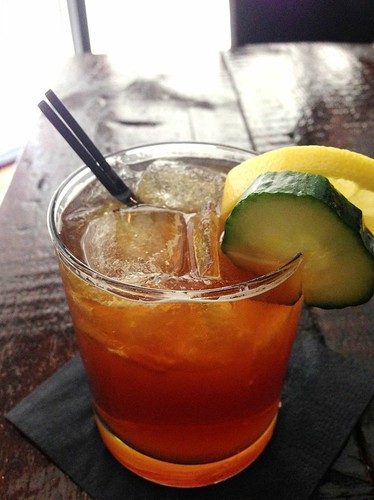 As we settled in with our drinks, Anthony started us on a few of the restaurant’s small plates. The first one we had was their Duck Liver Mousse. I was a fan of this because I love duck liver. The combination of the creamy and rich duck liver with the fresh strawberries and celery leaves was great. I really liked how the freshness of the berries cut through the richness. There was also a touch of soy and truffle glaze, a rhubarb mustard and some crumbled granola for texture. All together, it was a pretty great mix of flavors and textures. Who knew these random ingredients really work well together?!
Duck Liver Mousse
strawberry, rhubarb mustard, soy, celery, truffle 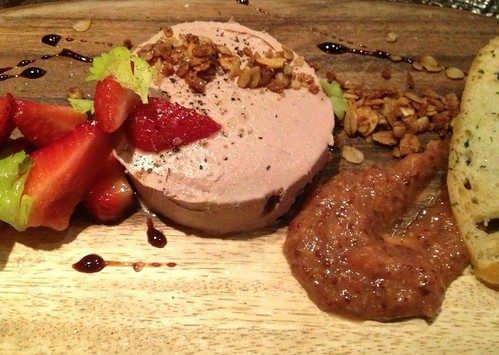 Next up was their Seared Scallop. The Baron loved this small plate. First off, the scallop was huge… enough to share. But beneath the scallop was slow braised pork cheek, some roasted fingerling potatoes, a small pile of creamed spinach and a drizzle of this amazing beer caramel. As if this wasn’t enough, the dish was garnished with a toasted piece of nori for added texture and flavor.
Seared Scallop
pork cheek, beer caramel, creamed spring spinach, fingerling, nori 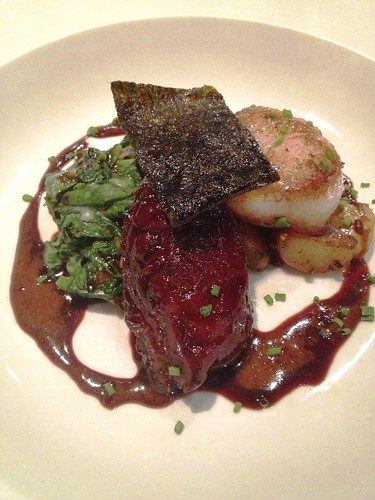 So far, it’s two for two with the small plates and we’re just getting started lol. One thing about the Baron that I’ve gotten accustomed to is his dislike of fish dishes. He’s a fan of shellfish but fish in general is not something he’s a fan of. When Anthony brought the Sable Fish, he gave it a try and thought it was good. But for me, I really enjoyed it. The fish was perfectly cooked and the bed of bamboo rice it rested on was the perfect accompaniment. It was paired with carrot and bok choy with a sake syrup to tie it all together.
Sable Fish
bamboo rice, baby bok choy, baby carrot, sake syrup 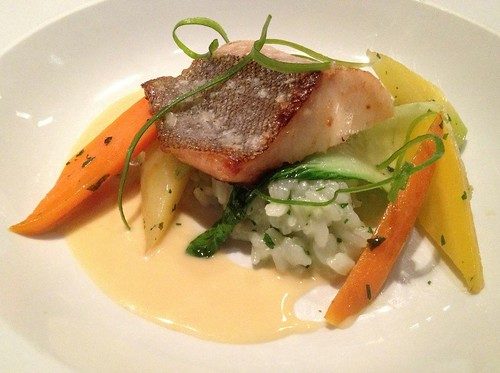 The next dish blew my mind. I’m still thinking about it. Imagine quinoa cooked and formed into baking pan like a solid pan of polenta… then cut into ‘fries’ before deep frying. The result? Crunchy quinoa french fries. I immediately thought, ‘Why didn’t I think of that?!’ I know some folks think anything fried has got to be good but it especially is true about quinoa. I loved this dish. When Anthony came back to check on us, I told him how awesome it was because the texture was so unexpected. But that’s not all – I didn’t even mention that on top of the quinoa fries were some smoky pulled pork and mushroom. To put the dish over the top {as if the quinoa fries weren’t enough} it was topped with a fried egg and a touch of truffle oil. Wow…
Quinoa Fry
pulled pork, fried egg, mushroom, truffle oil 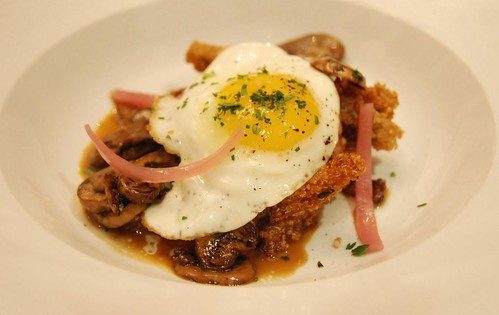 With the small plates done, it was time for our main entrees. I took Anthony’s recommendation and had the Berkshire Pork Chop. I’m so glad I did because it was fantastic. It was juicy, succulent and so flavorful. Served with the pork was a bacon bread pudding. Yes – you read that right. Bacon. In the bread pudding. Drool. I’m definitely taking notes and plan on making something like that for Thanksgiving this year! To cut the richness, a mildly spicy kim chi made with swiss chard was also on the plate. As a finishing touch, some sweet raisin jam gastrique was drizzled around the edge which added a nice flavor.
Berkshire Pork Chop
bread pudding, swiss chard kim chi, raisin jam, gastrique 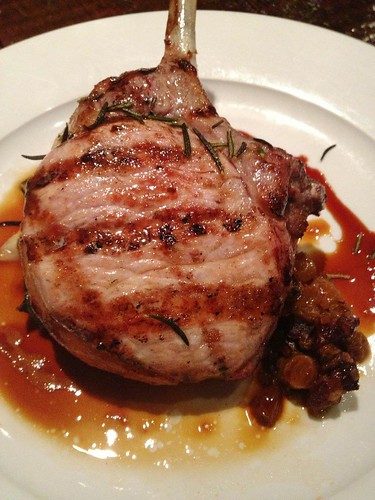 For the Baron, he had the Waygu Burger. This was a very, very good burger. In fact, he enjoyed it so much, he was reluctant to even share it with me. I did get a taste and it was awesome. He ordered his burger medium and it was perfectly done. The burger itself was so flavorful… then again, that’s due to it being Waygu beef. The cambazola cheese is a cross between a creamy French brie and an Italian gorgonzola, so you know that made the burger extra special.The crispy fried shallots and the buttery brioche bun just put the burger in a whole new level. Overall, it was one of the best burgers both the Baron and I had in awhile. We enjoyed the burger so much, we tried to replicate it at home a week later {which I didn’t take a picture of because we’ll be making it again and again and again lol}.
Waygu Burger
cambazola, tomato jam, arugula, fried shallot, butter bun, hand cut fry 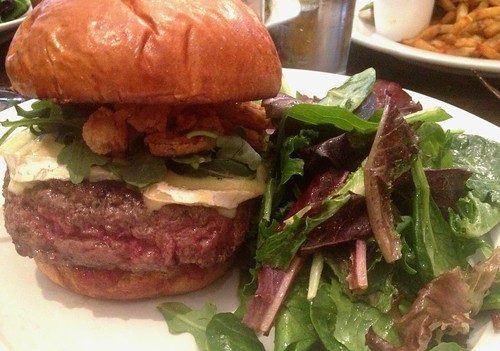 When we finished our meal, Chef Alex came out to meet us. It was great to talk to him about where he gets his inspiration for the dishes he prepares, the seasonal menu he creates and the various cultures he draws from whether it’s his own or the previous cuisines he’s cook throughout his career. 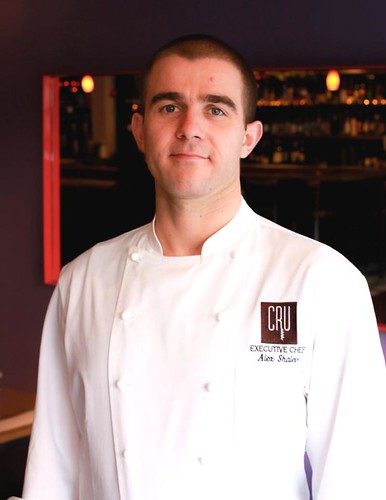 Both the Baron and I came to the restaurant for a nice dinner out but we left with our expectations met and more. In fact, the whole experience at CRU Kitchen & Bar was great and they definitely went above and beyond with their attentive service, delicious menu and genuine sincerity to make our visit memorable. Thank you to the entire staff at CRU Kitchen & Bar for the wonderful evening. And if you’re in the area and in need of a great place where you can find innovative dishes, amazing drinks and a place where you can come with friends or just or a special date, checkout CRU Kitchen & Bar… you’ll definitely leave full and far from disappointed!
Previous Post: « Raspberry Lemonade Cupcakes
Next Post: Tropical Shrimp Cups with Pineapple Salsa »