Happy {Chilly!} Monday! This has been quite a new year with such cold weather and snow that we’re experiencing here in Chicagoland. I hope wherever you are, you are keeping warm and staying safe. One of the things I need to do a better job at is eating breakfast. As a single mom, sometimes having breakfast during the work week can be challenge when I’m in a mad rush in the mornings. So this week, I’m featuring some breakfast fare that we’ve enjoyed recently. To kick off breakfast week, this Bacon, Swiss & Mushroom Quiche brought us back to our summer days. Crisp bacon, creamy swiss cheese and caramelized mushrooms bake up in a savory egg custard that’s baked into a flaky pie crust…

Last summer, the Baron and I took a weekend getaway out west to Oregon, IL. It was a wonderfully relaxing time hiking and exploring. So when deciding what to make for Christmas Eve morning, we thought about our favorite breakfast foods and the quiche we had during this weekend getaway came to mind. It was a recipe we received from the bed and breakfast we stayed at. It was so good that we added quiche as one of our favorite breakfast foods. So for Christmas Eve morning, I made this quiche which was adapted from the original recipe we had at the B&B. I opted to use bacon, swiss cheese and added mushrooms for a twist. It was delicious and we paired it with a fresh fruit salad and homestyle potatoes.

Another bonus about this dish is that it could be made in advance and enjoyed either warm or cold. I will be making a few quiches on a lazy Sunday and then portioning them out to enjoy during the upcoming weekday mornings for breakfast. The pieces or whole quiche freezes beautifully too! Feel free to use a gluten free pie crust otherwise any homemade or store bought pie crust can be used. 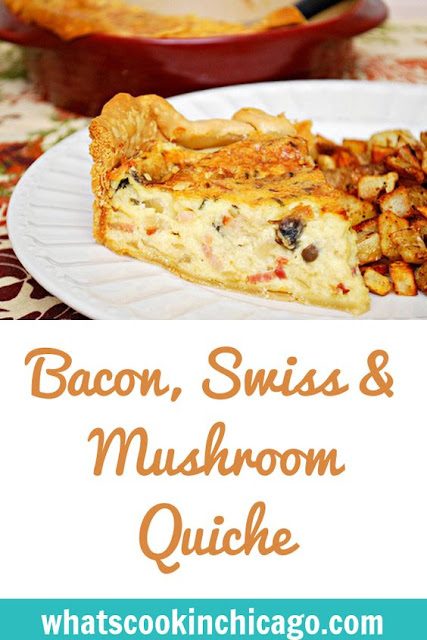 In a skillet over medium high heat, add bacon and cook until fat is rendered and bacon is browned and crisp. Transfer bacon from the skillet to a large bowl and set aside.

Add the cheese to the bowl and toss to combine with the bacon, onions and mushrooms. Place the mixture in the unbaked pie crust.

In another bowl, combine the eggs, heavy cream, salt and pepper. Pour egg mixture into the pie crust making sure everything is level.

Bake quiche in the preheated 425 degree oven for 25 minutes.

Decrease the oven temperature down to 375 degrees and bake quiche until is nicely browned, about  5-10 minutes. Remove from oven and cool completely before slicing.