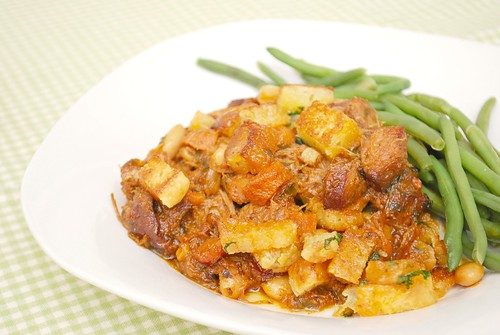 After a long {too long} winter, I’m hesitant about spring and if the warmer temperatures will continue. Maybe it’s because I’ve grown so used to my winter coat, boots and wearing layers. Maybe it’s because I no longer trust the weather reports. Or maybe it’s hard to shift from the comforting meals I’ve grown accustomed too during the bitter cold months. Well, despite how spring is’officially’ here, I’m not convinced it really feels like spring just yet. Given that, here’s a Simplified Chicken & Pork Kielbasa Cassoulet that makes winter a bit more bearable. Chicken, pork, bacon and Kielbasa slow cooks with beans and aromatics to create a comforting meal topped with buttery croutons to warm up to…

So just a little over a year ago, we helped The Baron’s best friend pack up a moving truck to move out west. One of our last meals together with G & J before their cross country move was at a French restaurant on Chicago’s ‘Restaurant Row’. Maude’s Liquor Bar had some amazing dishes… and even over a year later, I’m still thinking about the meal the four of us enjoyed. All of us ordered steak while J ordered their Cassoulet. It had garlic sausage, duck confit, braised pork belly and toasted breadcrumbs. After sampling J’s plate, I soon regretted my steak. I wanted cassoulet. I’ve been wanting cassoulet. And instead of going back to Maude’s to satisfy my craving, I looked for a way to make a homestyle version instead… and I found one! Cook’s Illustrated has a simplified version using more common ingredients in place of the fancier, gourmet version. Overall, this version was easy to put together and it satisfied my cravings. Finally.

When reading the recipe, it may seem overwhelming with all the various lengths of time the different components take to prepare. But… it’s worth it. Instead, think of this recipe as one you can make in advance and in stages. The chicken can be done in advance and rest in the brine for an hour. The topping can be done in advance since you’re just making croutons. The bacon can be fried in advance, as with the chicken thighs. Even the cubed pork can be cooked ahead of time. The magic happens when all these components are combined together and allowed to cook for about an hour. Add the beans and the Kielbasa the mix, top with croutons and bake for a few minutes until the top is golden brown. As I mentioned, it’s a simplified version of the traditional recipe… and it’s the perfect dish to warm you up as we thaw from the winter into springtime! 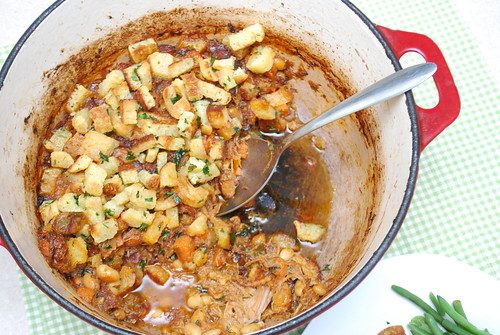 Preparing the Topping: While chicken is brining, adjust oven rack to upper-middle position; heat oven to 400 degrees. Mix bread crumbs and butter in small baking dish. Bake, tossing occasionally, until light golden brown and crisp, 8 to 12 minutes. Cool to room temperature; set aside. I love how the Plugra butter really added some richness in the topping while keeping it very crisp to offer some contrast in the dish!Preparing the Cassoulet: Fry the bacon in a Dutch oven over medium heat until just beginning to crisp and most of the fat has rendered, 5 to 6 minutes. Using a slotted spoon, add half of the bacon to the pot with the beans; transfer the remaining bacon to a paper towel-lined plate and set aside.

Return the chicken in the pot, adding any accumulated juices. Increase the heat to high and bring to a boil, then reduce the heat to low, cover, and simmer about 40 minutes. Remove the cover and continue to simmer until the chicken and pork are fully tender, 20 to 30 minutes more. Stir the kielbasa, drained beans and reserved bacon into the pot with the chicken and pork; remove and discard the thyme and bay leaf and adjust the seasonings with salt and pepper. Sprinkle the croutons evenly over the surface and bake at 425 degrees, uncovered, until the flavors have melded and the croutons are deep golden brown, about 15 minutes. Let stand 10 minutes and serve. 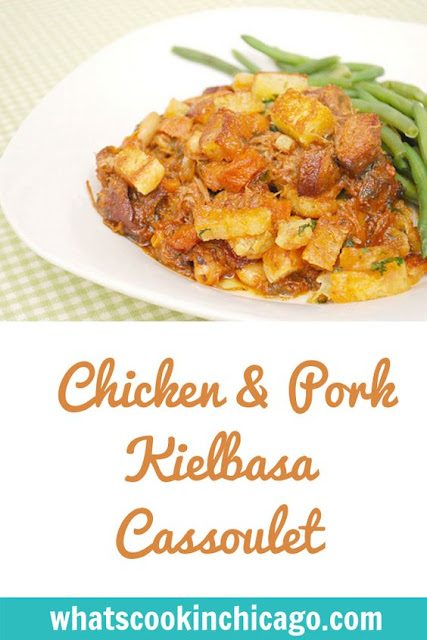