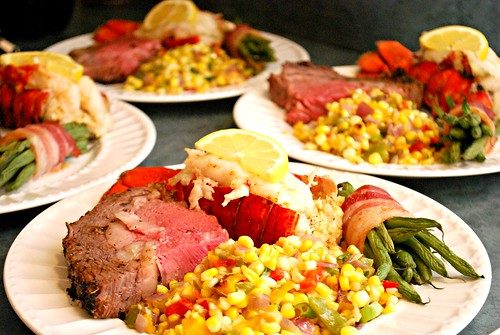 Happy Birthday to me! I can’t believe another year has gone by so quickly. It seems like the past year was a blur with some great events thrown in the mix. I can honestly say I’m happier than I’ve ever been. Life has been good, I’ve been healthy, surrounded by love and each day offers something to smile and laugh about. There is always a positive side in every situation and I feel fortunate that those I keep close keep me grounded so I can see and appreciate the silver linings.

To celebrate my birthday, I prepared a special dinner last weekend for my brother, James, the Baron and myself. As part of the Plugra Gourmet Club, I chose recreate one of their chef inspired dinner menus – the Surf & Turf by Chef Matt King of Smith & Wollensky Boston. It was a delicious dinner made possible by Plugra European Butter! 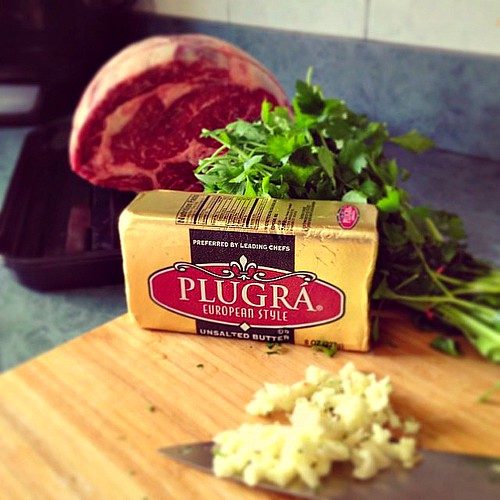 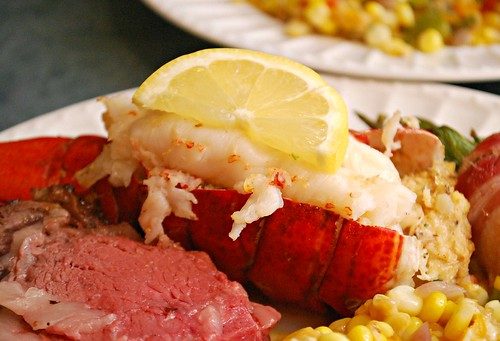 The Crab Stuffed Lobster Tail is a twist from the Stuffed Shrimp with Garlic Butter of Chef Matt’s menu. I wasn’t able to find good shrimp, much less the proper large shrimp called for the recipe. So instead, I used lobster tails. Doing so was much easier because the tail shell held the lump crab stuffing perfectly. I was also able to present the lobster tail beautiful over the top. The stuffing was a delicate mixture of lump crab meat, mayonnaise, egg, Old Bay seasoning, Dijon mustard, chives, some salt & pepper, and GF breadcrumbs. As a final touch for this dish, roasted garlic butter was brushed over the tops just before serving and garnished with a fresh lemon slice.
The Prime Rib Roast with Garlic & Herb Butter is also another twist from the Bone-In Spice Rub Rib Eye of Chef Matt’s Menu. I am a fan of prime rib roasts and opted to use that cut instead of tomahawk steaks or long bone ribeyes. I did prepare the Moroccan rub called for in the recipe and coated the rib roast in that before roasting. The original recipe also called for making a bone marrow butter. Finding marrow bones was also a challenge so I decided to use the same roasted garlic butter that brushed the tops of the stuffed lobster tails. The combination of garlic and herb butter with the Moroccan spice paired nicely! 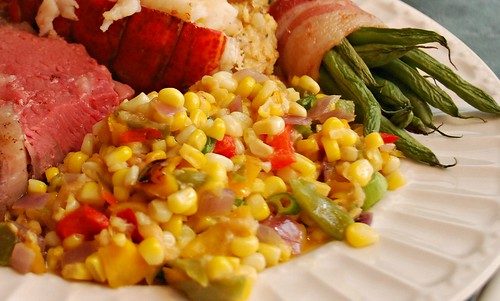 To accompany the surf and turf, I made the Creamy Summer Corn of Chef Matt’s Menu. Bell peppers, corn, green onions, red onions, garlic, heavy cream and Manchego cheese blend nicely as a colorful side dish. What made this really stand out was the ancho chili butter that was stirred in before serving. The recipe for the butter yields quite a bit, which makes for great uses in other dishes! I can’t wait to try it on some Cinco de Mayo fare next week…
Another side dish I prepared for the meal was some green beans wrapped in bacon. Bacon does make things better, right? This was nothing more than green beans rolled into a strip of thick sliced bacon, seasoned with salt, pepper and a touch of brown sugar before baking in the oven until the bacon is slightly crisp around the edges. 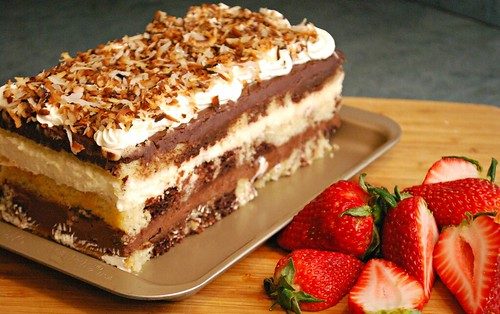 And to finish off the meal, a proper birthday dinner should have cake! Chef Matt’s menu called for a Coconut Cake. Since we were celebrating my birthday and all, there had to be some chocolate incorporated… and coconut and chocolate go well together. That said, I made a Chocolate Coconut Layer Cake. I made the coconut cake batter as written in the recipe, but reserved about 1/4 of the batter where I stirred in dutch cocoa. Instead of baking the cake batter in traditional cake pans, I spread the batter onto an jelly roll pan. I then dolloped some of the chocolate coconut cake batter on top, then swirling the two cake batters to gently combine. The cake was then baked, cooled and I cut the large jelly roll cake into four equal pieces. While the cake was baking and cooling, I prepared the coconut simple syrup, coconut cream filling and also a chocolate ganache. When the cake layers were cool, I started to assemble the cake by brushing a layer with the coconut simple syrup, followed by a layer of chocolate ganache. Another cake layer went on top of that, another brushing of coconut simple syrup and then the coconut cream filling. I repeated these steps, ending with coconut cream filling, which I piped on top with a decorative tip. To finish the cake, I toasted some shredded coconut and sprinkled them on top. Fresh strawberries were on sale so I served them alongside the cake for a bit of color and freshness. 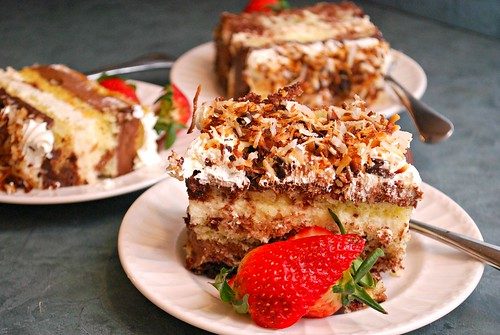 Overall, it was a fabulous dinner and a special thank you to my friends at Plugra for making my birthday a delicious celebration. Stay tuned next week where I’ll be sharing the recipes for my adaptations. Since today is my actual birthday, here’s a virtual slice of cake… thank you for visiting!