One of my favorite cuts of pork is pork belly. The richness of the fat layer above and lean meat underneath lends itself to a most succulent meat of meat. So to give this cut of meat the spotlight, I used it to make a Sous Vide Sesame Ginger Pork Belly which was served sandwiched into a fluffy dough and dressed with a touch of hoisin sauce and a sprinkling of green onions… 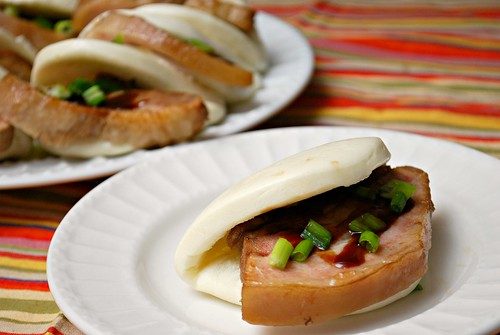 Preparing dishes with a sous vide system is far easier than you think. I’ve gotten the hang of it by realizing it’s simply a matter of vaccum sealing your ingredients and then allowing the ingredients to cook in a water bath. It’s kind of like a crockpot where you just ‘seal it and forget it.’ Using my SousVide Supreme system, I first set the water bath to come to temperature (in this case, 170 degrees.) 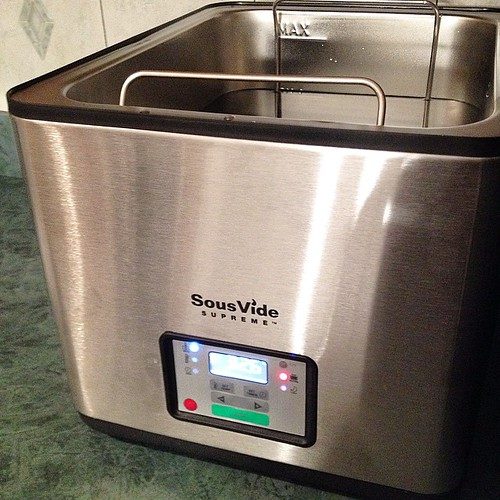 Meanwhile, I placed my pork and marinade ingredients in a vaccum pouch and sealed it. The pouch was then placed in the sousvide to cook for about 10 hours. Because of the long cook time, I prefer having it cook overnight while I’m asleep. 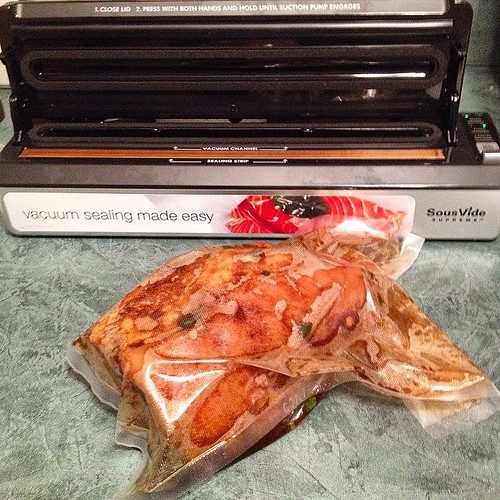 The pouch is then removed and I let it chill in the fridge. Before serving, I remove the pork from the pouch and begin slicing it for sandwiches. I served them in fluffy soft bao buns, which you can make yourself or purchase from the store. 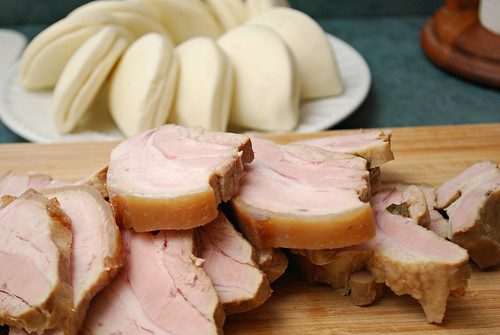 Combine soy sauce, mirin, sugar, green onion and ginger in the bowl and whisk to create the marinade.

Place pork belly and marinade to a vacuum bag and seal.
Transfer to sous vide cooker and cook until completely tender, about 10 hours.
Remove bag from cooker and chill thoroughly.
Remove pork belly from bag and slice in 1/2 inch thick slices. Place on a broiler pan and broil just until slightly charred.Serve in steamed buns with hoisin sauce and garnish with sliced green onions.
Previous Post: « November Resto Round Up!
Next Post: 12 Days to Christmas Countdown! – Day 12: Holiday Cookie Swaps! »