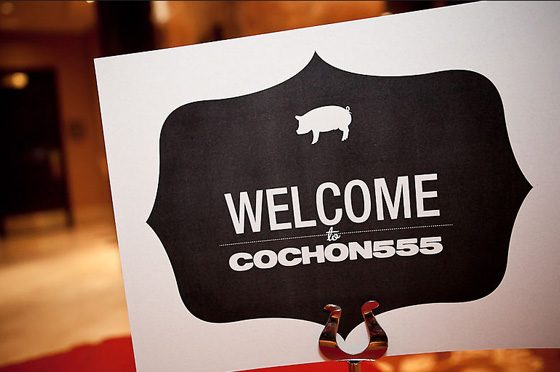 I love pork. Probably more than I should! So when the opportunity to attend Cochon555 came up, it was a no-brainer. This past Sunday, April 24th, Cochon555 was held at the Loews Chicago Hotel and we had our restaurant editor attend on our behalf to enjoy all things pork! It was an amazing culinary experience, but more on that in a bit… 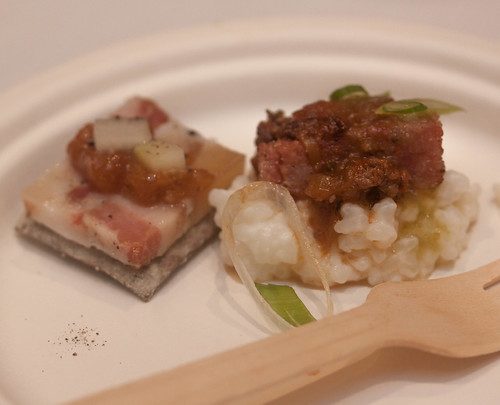 So what exactly is Cochon555? This event was created in 2008 in response to the lack of education around heritage breed pigs. The event series started from a thread of conversations where family farmers struggled to educate chefs, restaurants looked to source exceptional ingredients, and consumers sought out responsibly raised proteins. They all converged into one idea: the ultimate quest of flavor. The tour is aligned with the modern-day good food movement — notable chefs, barrier-breaking women and men, artist-like butchers, spirited bartenders and brazen pastry talent. Together, they highlight all things pig and even incorporate some culinary competition. 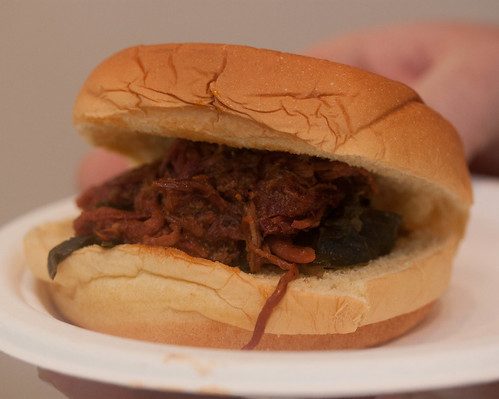 “Cochon555 has been an very delicious and very satisfying experience. I was very honored to participate. I got to taste forty scrumptious bites prepared by chefs paired with artisan wines from the best winemakers in the county.

Cochon555’s events benefit Piggy Bank, a genetic sanctuary that will provide free heritage breed pigs to emerging family farms and culinary schools. Guests are united with the who’s who of the good food movement helping to raise monies to support the first open-source platform for family farming.

Two of my favorite bites were the PB&J from Rural Society: peanut butter pork liver mousse and raspberry rhubarb jelly on toasted brioche and the Empanadas: smoked pork belly with scrambled eggs and ramp chimichurri. 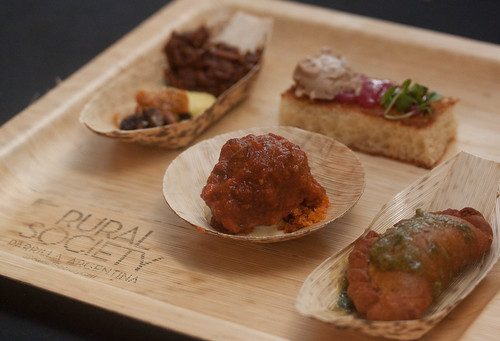 I never had steak tartare before, but Creekstone Farm’s steak tartare with pickled beef hearts, ramp ravigote and crispy mustard greens were so good that I had a couple of bites! 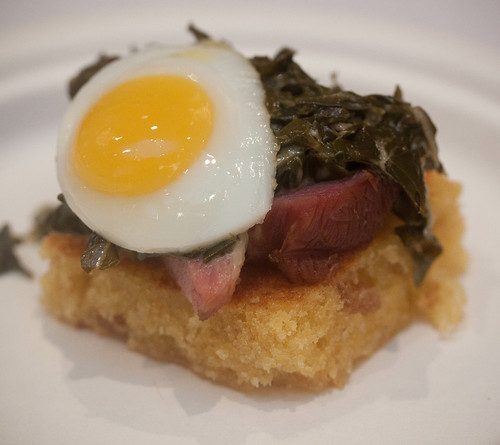 The wine and cocktails were works of art! Breckenridge’s bourbon presentation was spectacular. The mason jar was filled with smoke from burning wood and the bourbon and ice was poured over it. The aroma of the smoke and the depth of flavor of the bourbon paired very nicely.

The kicker for me was the live butchering event. I haven’t seen a pig broken down before and I learned a couple of things from watching the chefs. It takes a lot of skill and training to do such a feat in a record amount of time. 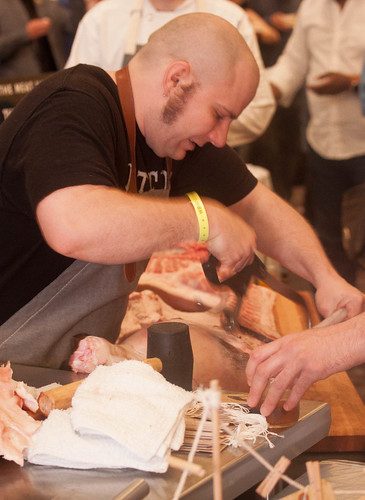 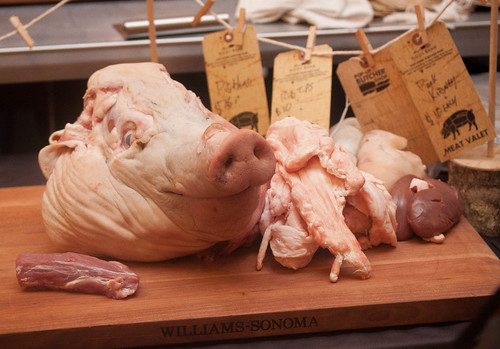 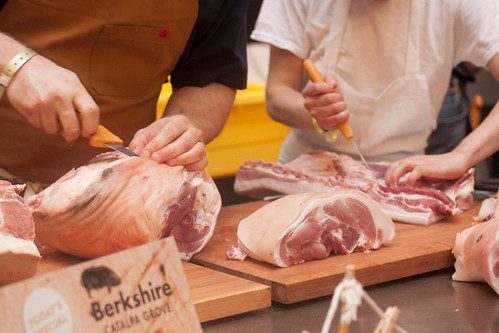 To see homemade sausage made in front of my eyes was eye-opening. I’m considering to buy a sausage making attachment for my KitchenAid mixer and learn how to make some savory and spicy sausage. 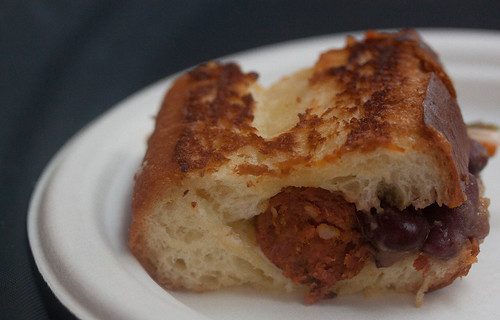 All in all, I had a great time at Cochon555. I ate, I drank, and I learned a lot from this culinary experience. I hope to attend next year’s event!” – Jon, WCC’s restaurant editor

A special thanks to Jon for attending on our behalf and sharing his experience!

The Cochon555 U.S. Tour, executes a variety of authentic, hyper-local food events focused on raising awareness for heritage breed pigs with the world’s first nose-to-tail pig competition. Created in response to the lack of consumer education around heritage breed pigs, this epic pork feast visits 20 major cities in North America annually with over 60 events. The tour also features a multitude of live-event expressions including Heritage BBQ (global cultures), Heritage Fire (live-fire event), EPIC Cochon (hyper-premium), All-Star Cochon (fan favorites) and Cochon Island (agri-tourism). All Cochon555 events cultivate a long-term impact for heritage species raised by family farms, reaching the top culinary markets in North America while promoting our sponsors’ messages to 16,000 guests by drawing from the biggest names in the hospitality industry, including 2,200+ chefs, 150+ family farms and 16 culinary schools. Since 2009, 50,000+ consumers have experienced heritage pork for the first time, more than $500,000 has been donated to charities and over $750,000 has been paid directly to our farmers. Together with winemakers, brewers, distillers and craft food makers they create authentic culinary events celebrating champions in the good food movement. For more details about the events and to see videos referencing all the events in the Cochon555 family, visit www.cochon555.com or follow @cochon555 on Twitter and Instagram.
About Piggy Bank
Launched in 2015 by Brady Lowe, founder of the Cochon555 US Tour and Taste Network, Piggy Bank’s mission is to create a heritage breed pig sanctuary that provides free genetics and business plans to emerging family farms. The sanctuary will change the future of food by uniting a community working together for safer, responsible farming practices and sharing of genetics, livestock and the sharing of information. Piggy Bank is dedicated to creating the first Open Source agriculture platform through the responsible farming of heritage species. The Piggy Bank farm, located in Missouri, will raise pigs to be gifted only to communities dedicated to elevating the cause and expanding the model of social and agricultural transparency. Piggy Bank is a project of The Giving Back Fund, Inc., a Massachusetts nonprofit corporation with federal tax exempt status as a public charity under Section 501(c)(3). Follow the Piggy Bank conversation on Twitter @PiggyBankOrg. For more information about Piggy Bank or The Giving Back Fund, please contact Kerith Dilley or visit www.piggy-bank.org.
Previous Post: « Eat A Dish for Make A Wish!
Next Post: Fresh Raspberry Cream Scones with Lemon Glaze »