Home » Uncategorized » Instant Pot: Double Berry Oatmeal
Happy Monday! It’s that time again to get motivated for the week ahead! Over the weekend I decided to plan out my breakfasts a bit differently. Last week, it was all about homemade Greek style yogurt. This week, it’s all about oatmeal. Forget about those instant oatmeal packets. This Double Berry Oatmeal will have you wanting to start your day healthy with every hearty, fruity, creamy bite… 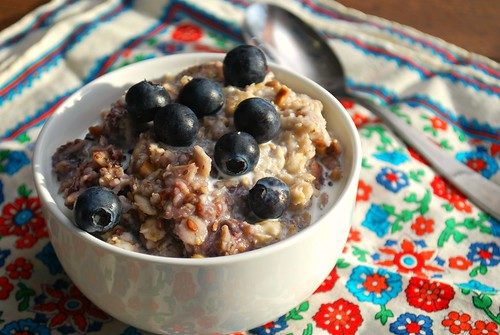 My husband was confused how oatmeal could be regarded as something special. It wasn’t until I told him oatmeal didn’t have to be boring, mushy and bland. Oatmeal would be as customized as the homemade Greek style yogurts he was enjoying all week. To prove my point, I made this Double Berry Oatmeal. Made with steel cut oats, dried berries, and water, it only took a few minutes to cook in the Instant Pot. Afterwards, the boys devoured it when they topped it with more fruit and a touch of cream. Between yogurt and oatmeal, I’d say my boys have seen the healthy light of breakfasts!
I used the dried tart cherries and dried blueberries from Bob’s Red Mill. You can even use dried cranberries and other fruit if you’d like. For an added spin, add some chia seed and/or flax seed to give your oatmeal a boost! Bob’s Red Mill has all the dried berries, chis seed and flax seed available, along with a variety of different oats.
Instant Pot: Double Berry Oatmeal
original Joelen recipe
Equipment:
IP
wooden spoon
measuring cup
Ingredients:
1 cup steel cut oats
1/4 cup dried tart cherries
1/4 cup dried blueberries
3 cups water
fresh blueberries (optional)
half & half (optional)
In your Instant Pot:
Plug in the IP and oatmeal, dried cherries, dried blueberries and water.
Secure the lid of the IP and ensure the valve is set to SEALING.
Press MANUAL and adjust the time to 3 minutes on HIGH pressure.
The display will reflect ON while the IP comes to pressure. Allow a few minutes for your IP to come to pressure. Once at pressure, the display will reflect 3 (the number of minutes you initially set) and will begin to countdown to 0 minutes.
When the IP beeps after pressure cooking for 3 minutes, allow your IP to naturally release pressure for 7 minutes. While naturally releasing pressure (also known as NRP or NR), the display will reflect numbers counting up from 1. The numbers indicate how many minutes the IP has stopped cooking since it beeped (or how many minutes it has been naturally releasing pressure).  No need to touch your IP while it naturally releases pressure.

When the display reflects 7 minutes (which is 7 minutes since the IP has beeped), turn the setting on top of your IP to VENTING. Doing so allows the IP to quickly release pressure (also known as QRP or QR). I use a wooden spoon to carefully turn the setting to avoid close contact with the potential steam. You may also want to turn your IP away from cabinets to allow the released steam to escape freely. The pin at the top of your IP will drop when all pressure has been released and it’s safe to open.

Open up your IP when the pin has dropped (allow a few minutes for this to happen).
Stir oatmeal. You’ll notice it may look like there is more liquid for the oatmeal to absorb, but the oatmeal will absorb it as it continues to cool.

To serve, enjoy as is or top with more fresh blueberries or even a touch of half & half!