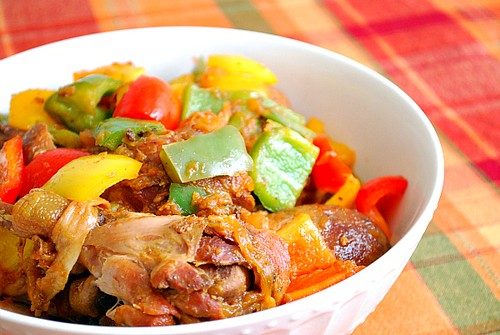 If there is anywhere in the world I would love to live the rest of my life, it would be Hawaii. It’s been years since I’ve last been and I know someday I will be back… for good. Someday. Until then, I can only dream about the days I eat common dishes found in Hawaii. One such dish is this Huli Huli Chicken. This recipe involves braising chicken in a sweet sauce in the Instant Pot. You could even take it a step further and broil or grill the chicken after pressure cooking, but we loved it as is. The best part of this chicken dish is definitely the sauce. It’s sweet, salty with a subtle tartness….

The sauce includes crushed pineapple, brown sugar, ketchup, lime juice, soy sauce, garlic and ginger. It may seem like an odd combination but trust me… over time, this concoction will create something pretty delicious. For fellow gluten free foodies, I used tamari in place of soy sauce. You can also use liquid aminos as well. I adapted this recipe by using crushed pineapple and adding some color with the addition of colorful bell peppers. Rather than broiling the chicken to finish after braising, I served it as is with its juices over steamed rice. It was very similar to a sweeter version of the popular Filipino Adobo. This is another dish you can prep for a make ahead slow cooker meal. Get the slow cooker version here!

Plug in the IP with insert set in place.
Press SAUTE and add crushed pineapple, brown sugar, ketchup, lime juice, soy sauce, garlic and ginger. Cook for 5 minutes or until thickened. Season with salt and pepper to taste.

Season chicken with salt and pepper; add to IP and coat evenly with sauce.
Secure the lid of the IP and ensure the valve is set to SEALING.
Press MANUAL and adjust the time to 25 minutes on HIGH pressure.
The display will reflect ON while the IP comes to pressure. Allow a few minutes for your IP to come to pressure.

While chicken is naturally releasing pressure, heat a skillet over medium high heat. Add oil and when hot, add bell peppers. Sauté peppers until slightly softened; remove from heat and set aside.
When the display reflects 10 (which is 10 minutes since the IP has beeped), turn the setting on top of your IP to VENTING. Doing so allows the IP to quickly release pressure (also known as QPR or QR). I use a wooden spoon to carefully turn the setting to avoid close contact with the potential steam. You may also want to turn your IP away from cabinets to allow the released steam to escape freely. The pin at the top of your IP will drop when all pressure has been released and it’s safe to open.

Transfer to a serving dish and enjoy with rice.