Home » Uncategorized » Instant Pot: Chicken Enchilada Soup
It’s been awhile since I made some soup and after going through my recipe archives, I came across this delicious Chicken Enchilada Soup. It’s everything I love about chicken enchiladas all in a bowl! Boneless, skinless chicken breast slowly simmers in a soup of enchilada sauce, chicken broth and milk. Joining in the mix are kidney beans, tomatoes, sweet corn, onions and bell pepper. This is a hearty soup of a Mexican favorite dish! 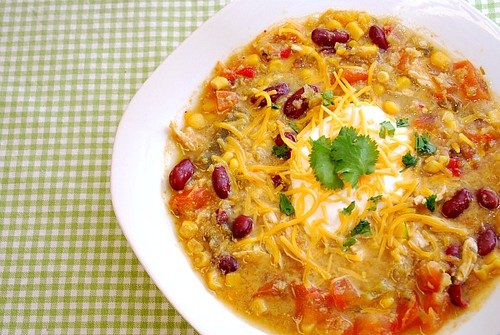 Making soup couldn’t be any easier with the use of my Instant Pot! This dish comes together quickly and easily by combining everything in the Instant, allowing it to pressure cook for a few minutes and viola – delicious magic! The star of this dish is the enchilada sauce. Originally, red enchilada sauce was used but I adapted the recipe to use green enchilada sauce instead. Also, to help thicken this soup, a roux of butter and flour was part of the original recipe. To make it slightly different and gluten free friendly, I used a slurry of cornstarch and water, which not only thickened the soup but gave it a nice sheen. If you don’t have an Instant Pot, get the slow cooker/crockpot recipe version here!

Chicken Enchilada Soup
recipe adapted from So Tasty, So Yummy


In your Instant Pot:

Add the 2 whole chicken breasts into the IP.
Secure the lid of the IP and ensure the valve is set to SEALING.
Press MANUAL and adjust the time to 5 minutes on HIGH pressure.
The display will reflect ON while the IP comes to pressure. Allow a few minutes for your IP to come to pressure.

Once at pressure, the display will reflect 5 (the number of minutes you initially set) and will begin to countdown to 0 minutes.

When the display reflects 10 (which is 10 minutes since the IP has beeped) all pressure should have naturally released. If not, turn the setting on top of your IP to VENTING. Doing so allows the IP to quickly release any remaining pressure (also known as QPR or QR). I use a wooden spoon to carefully turn the setting to avoid close contact with the potential steam. You may also want to turn your IP away from cabinets to allow the released steam to escape freely. The pin at the top of your IP will drop when all pressure has been released and it’s safe to open.

Remove the chicken breasts from the IP and chop into bite sized pieces. Add milk chopped chicken and back into IP; stir.

Combine the cornstarch and water in a small bowl and whisk to make a slurry; stir mixture into the soup to thicken slightly and warmed through.

To serve, ladle into bowls and top with your choice of garnishes.