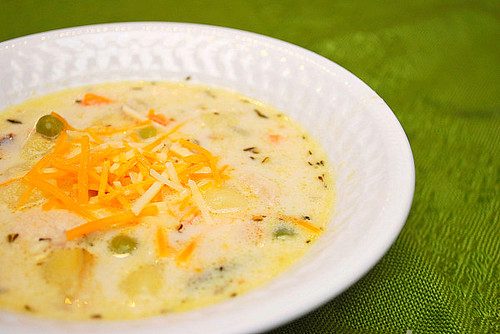 Chowda. Some days I wish I lived in Boston, Mass. because they really know how to make a good chowda. The thick and creamy consistency is nothing less than comforting, especially on a cool, fall night. When I think of chowder, the first thing that comes to mind is a clam chowder. However, I came across a recipe for Chicken & Potato Chowder with Thyme- a different spin on the chowder I’m familiar with. I loved that the recipe highlighted fresh thyme!  With a few changes, my adapted recipe for Chicken & Potato Chowder will now be in my fall recipe collection…

Typical chowders consist of bacon, milk or cream and has a thick consistency. I’m not sure I would really classify this as a true chowder since it lacks a thick consistency. Instead, it is rich with flavor from bacon, chicken, potato, half & half and a few vegetables for good measure. For this recipe, the major change was using frozen mixed vegetables instead of corn. This added more color and texture to the dish. And since bacon and half & half are already in the mix, why stop there? I garnished each serving with a sprinkling of shredded cheese. So it may not be a true chowda but it’s good eats nonetheless!

Press SAUTE and add the bacon, onions and garlic, allowing it to cook until the onions soften and bacon is slightly crisp, about 3-5 minutes.

Add broth, potatoes, chicken and fresh thyme to the IP.

Secure the lid of the IP and ensure the valve is set to SEALING.
Press MANUAL and adjust the time to 7 minutes on HIGH pressure.
The display will reflect ON while the IP comes to pressure. Allow a few minutes for your IP to come to pressure.

Once at pressure, the display will reflect 7 (the number of minutes you initially set) and will begin to countdown to 0 minutes.

When the IP beeps after pressure cooking for 7 minutes, turn the setting on top of your IP to VENTING. Doing so allows the IP to quickly release any remaining pressure (also known as QPR or QR). I use a wooden spoon to carefully turn the setting to avoid close contact with the potential steam. You may also want to turn your IP away from cabinets to allow the released steam to escape freely. The pin at the top of your IP will drop when all pressure has been released and it’s safe to open.
Open up your IP when the pin has dropped (allow a few minutes for this to happen).
Press SAUTE.

Add the mixed vegetables and stir half and half into the soup; allowing it to come to a boil.

Season with salt and pepper to taste. Ladle into bowls, and sprinkle with the shredded cheese and bacon (if using). Serve hot.