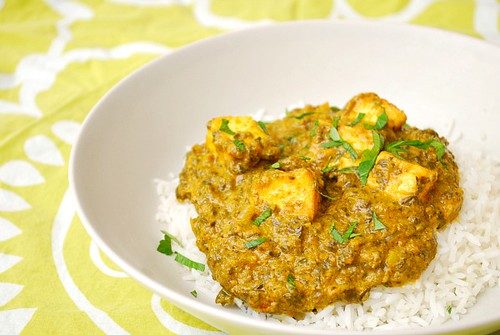 One cuisine I’m most intrigued about is Indian. The complex blend of spices, use of exotic ingredients and intense flavor and aroma of this cuisine has a spell on me… especially lately. It seems as though I just can’t get enough of this delicious food! I’m often hesitant making Indian dishes at home because I know it’s not truly authentic. But even then, my tolerance to heat and spice is most likely laughable to those used to the true preparation of the dishes. Nonetheless, this version of SaagPaneer turned out well for an Americanized version. Creamy, aromatic and with a beautiful color, this dish has a deep flavor similar to the ones I’ve had a Indian restaurants…

So what exactly is Saag Paneer? This is a dish that consists of spinach, spices and bite sized farmers cheese. It’s the kind of dish that’s comforting when served over rice or even with warm, buttery naan bread. However you enjoy it, it’s certainly a common dish of Indian cuisine. Most might assume there would be a long list of spices to make various Indian dishes. This recipe calls for ingredients that are fairly common at most supermarkets and you may already have most in your pantry. Paneer cheese may be trickier and if that cheese isn’t available, you can substitute it with ricotta cheese and stirring it in. 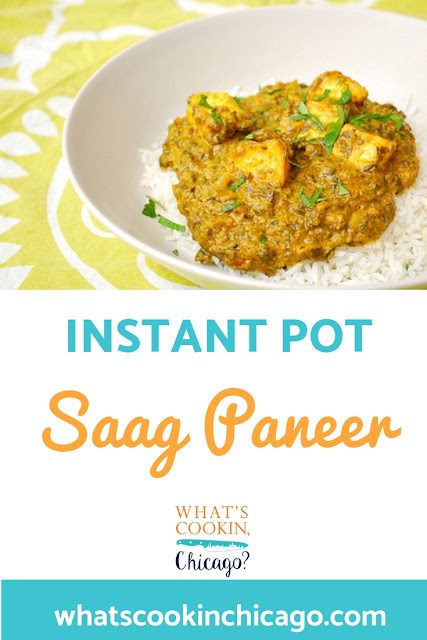 Plug in the IP with insert set in place.
Press SAUTE and add oil. When hot, add garlic, 1/2 tablespoon of ginger, red chilies (optional ingredient) and onion; saute until brown.

Add the spinach and chicken broth.

Secure the lid of the IP and ensure the valve is set to SEALING.
Press MANUAL and adjust the time to 1 minute on HIGH pressure.
The display will reflect ON while the IP comes to pressure. Allow a few minutes for your IP to come to pressure.
Once at pressure, the display will reflect 1 (the number of minutes you initially set) and will begin to countdown to 0 minutes.
When the display reflects L00:01 (which is 1 minute since the IP has beeped), turn the setting on top of your IP to VENTING. Doing so allows the IP to quickly release any remaining pressure (also known as QPR or QR). I use a wooden spoon to carefully turn the setting to avoid close contact with the potential steam. You may also want to turn your IP away from cabinets to allow the released steam to escape freely. The pin at the top of your IP will drop when all pressure has been released and it’s safe to open.
Preheat your broiler as you wait for the pin to drop and all pressure is released from the IP.
Open up your IP when the pin has dropped (allow a few minutes for this to happen).

Using an immersion blender, blend for 15 to 30 seconds, or until the spinach is finely chopped. (Alternatively, you can pour spinach mixture into a blender or food processor, and process).

In a medium frying pan heat 3 tablespoons of olive oil over medium heat, and fry cheese until browned; drain and add to spinach mixture in the IP.