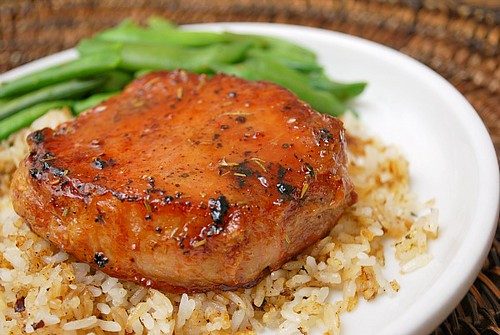 This weekend we went freezer diving. You know what that is, right? It’s when you’re fishing around in your freezer and making do with whatever random stuff you’ve got because it’s too much effort to go out in the cold for groceries. That and you really don’t want to get suited up to deal with the falling snow that’s already quite a few inches deep. Yeah, that’s freezer diving. The good thing is that I was able to make this Maple Rosemary Glazed Pork so we could have a fairly decent dinner. It’s amazing what you can pull off with some pork, maple syrup and dried rosemary!…

The original recipe called for a pork loin roast, which I didn’t have. However I did have thick slices of pork loin which is pretty much the same thing. In fact, I thought this was better using slices so that you could really enjoy the flavor of the sweet glaze. Making this couldn’t have been any easier. After seasoning the slices of pork and pressure cooking, a simple glaze made with maple syrup and dried rosemary was made in the same pot. The pork is placed on a baking sheet and the glaze is poured on top before baking to finish in the oven. This recipe could probably work nicely with chicken too. I served this over toasted garlic rice pilaf and steamed sugar snap peas. 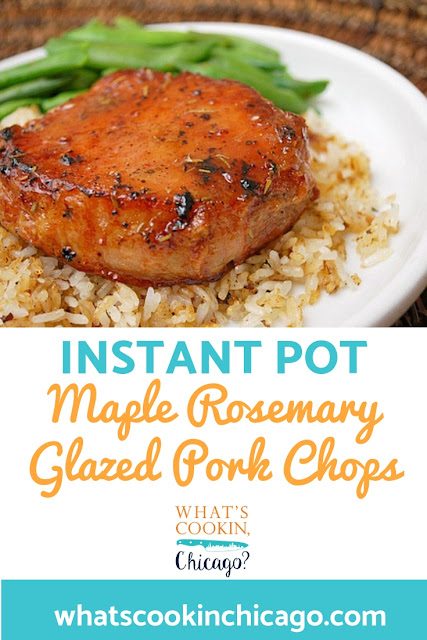 In your Instant Pot:
Plug in the IP with insert set in place.
Season both sides of each pork chop/pork loin slice with salt and pepper to taste.
Add oil to IP; when hot add the pork. Sear on both sides until well browned, about 3 minutes per side.
Add 1 cup vegetable broth (chicken or pork broth works too)
Secure the lid of the IP and ensure the valve is set to SEALING.
Press MANUAL and adjust the time as reflected below on HIGH pressure:
– 7 minutes for fresh pork
– 10 minutes for partially frozen pork
– 13 minutes for fully frozen pork
The display will reflect ON while the IP comes to pressure. Allow a few minutes for your IP to come to pressure.
Once at pressure, the display will reflect the number of minutes you initially set and will begin to countdown to 0 minutes.
When the IP beeps after pressure cooking, allow your IP to naturally release pressure for 7 minutes. While naturally releasing pressure (also known as NPR or NR), the display will reflect numbers counting up from 1. The numbers indicate how many minutes the IP has stopped cooking since it beeped (or how many minutes it has been naturally releasing pressure).  No need to touch your IP while it naturally releases pressure. The pin at the top of your IP will drop when all pressure has been released and it’s safe to open.
When the display reflects 7 (which is 7 minutes since the IP has beeped) turn the setting on top of your IP to VENTING. Doing so allows the IP to quickly release any remaining pressure (also known as QPR or QR). I use a wooden spoon to carefully turn the setting to avoid close contact with the potential steam. You may also want to turn your IP away from cabinets to allow the released steam to escape freely. The pin at the top of your IP will drop when all pressure has been released and it’s safe to open.
Open up your IP when the pin has dropped (allow a few minutes for this to happen). Remove the pork from the pot; set aside.
Press SAUTE and add the maple syrup and rosemary to the broth in the IP. Cook until fragrant, about 30 seconds to a minute.
Remove 1/4 cup of the mixture from the IP and combine with 1 tablespoon cornstarch to create a slurry. Slowly add back to the IP and stir in to thicken for a glaze.
Place the pork back into the IP to coat with the glaze and place the pork back onto the baking sheet.
If you’d like more color on the pork, preheat broiler and place the glazed pork onto a baking sheet. Broil until browned.
Allow the pork to rest for a few minutes before serving.